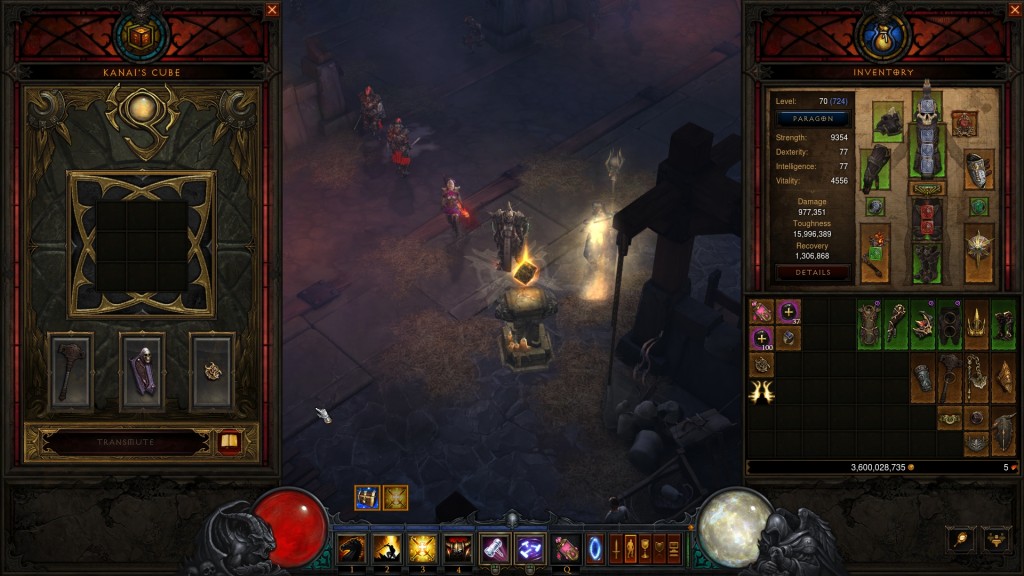 Patch 2.3 introduces to us a new Crusader set called the Seeker of the Light. The focus is on Blessed Hammer and Falling Sword. For the most part, it is a pretty decent damaging set with some defensive capabilities built in but utilizes a somewhat awkward skill in Falling Sword as a key feature. This blog discusses the gear, skills and overall play style based on my experience with the PTR.

For the most part, this set can be a full 6 set where you will be using the Bastion of Will to do incredible damage. In addition to the basic set, you will be using the new pieces of Johannas Argument , a one handed flail that increases Blessed Hammer’s attack speed by 100%, Guard of Johanna, a Crusader shield that improves Blessed Hammer by 200-250% for the first 3 enemies it hits and Gabriels Vambraces, new bracers which refunds wrath when Blessed Hammer hits 3 or less enemies. Most of the time you will be spamming Blessed Hammer and multiplying this effect out, which makes this a very resource intense build. While the new bracers do help in maintaining your wrath, you can also use Reaper’s Wraps to augment your wrath from health globes.

Other gear you may consider for this build are Blessed of Haull which spawns a Blessed Hammer from Justice and Obsidian Ring of the Zodiac from Kanai’s Cube to help reduce some of your cooldowns like Akarat’s Champion and Steed Charge. For your weapon slot in Kanai’s Cube you can go either with The Furnace or use Johannas Argument. Right now, I can’t remember if Johanna’s Argument augments your Blessed Hammer damage like many other complimentary weapons do. But in my case, I simply ran out of crafting materials to cube this weapon. Otherwise, I would’ve just stuck with my ancient Furnace since the damage is a lot higher.

Three other items you can potentially use with this build are Cams Rebuttal, which lets you use Falling Sword again 4 seconds before it’s cooldown is triggered, Kassars Retribution, a one-handed flail which increases your movement speed by 15-20% after you cast it for 2 seconds and Justinians Mercy, which gives Blessed Hammer the Dominion rune. I don’t believe these items are real game changers for this build. Cam’s Rebuttal seems more like a cheap teleport ability. However, Falling Sword just is too slow to really be useful here. Kassar’s Retribution helps somewhat with speed since this build feels very heavy and slow, but it’s not my choice over raw damage from a Furnace. And lastly the Dominion rune is a nice to have but not truly mandatory since it’s not adding anything at this point for you.

Skill-wise, you will be looking at, of course, Blessed Hammer with the Limitless rune. That helps create the multiplier effect with Blessed Hammer. In my case, I ended up using Justice with Sword of Justice for the movement speed, the ability to proc Bastion of Will and instigating another Blessed Hammer from the belt.

The other big skill as part of the set is Falling Sword. I ended up choosing Rapid Descent mostly for the reduction in cooldown so that I can keep up my defense. My main purpose behind Falling Sword in truth though is a bizarre movement modifier. It’s a really odd skill that is similar to Leap for Barbarians except that you just hover invisibly over your enemies until you land. There is a momentary lapse where you can’t move, which is something I find very awkward. It’s not really that great of a skill for damage but you can use it to overcome obstacles like wallers or jump over terrain.

For the last three active skills, I chose Steed Charge, for movement and some life regeneration, Akarat’s Champion: Prophet for my defense cooldown and Laws of Valor: Unstoppable Force which cuts my resource cost in half, which is very useful for spamming Blessed Hammer.

As for your passives, you should go with Blunt for the increase in damage to Justice and Blessed Hammer, Finery for the increase in strength via gems, Long Arm of the Law to keep your Unstopppable Force active as long as possible and either Heavenly Strength or Fervor depending on if you use the Furnace or Johanna’s Argument. Your element will be going Holy as your elemental damage of choice for this build.

Play style, you pretty much will be spamming Blessed Hammer while tossing out Justice to keep your Bastion of Will up. When you see grouped up mobs, you should use your Falling Sword as a movement burst and to increase your defense temporarily before spamming your Blessed Hammer and Justice again. Keep your Law up to maintain your resources at a high level and use Akarat’s Champion and/or Steed Charge as your emergency buttons. Steed Charge, of course, should be used for the short burst of speed in clearing areas but occasionally you might land with Falling Sword into an area with a great amount of damage ongoing.

Overall, I found this build to be a lot of fun, doing respectable damage, having decent defense and pretty smooth game play. The only pain points is the lack of fast movement, the awkward Falling Sword ability and pointless integration with Provoke. You can use Provoke as a generator instead of Justice, but you’d lose out on integrating this build with Bastion of Will. I feel that Justice and Blessed Hammer work very well together, making this build a semi-ranged play style. You can’t really sacrifice the other skills in this build, which makes me question why Provoke as considered part of the set. At any rate, this is definitely one of the better builds to be on the look out for in the upcoming patch.