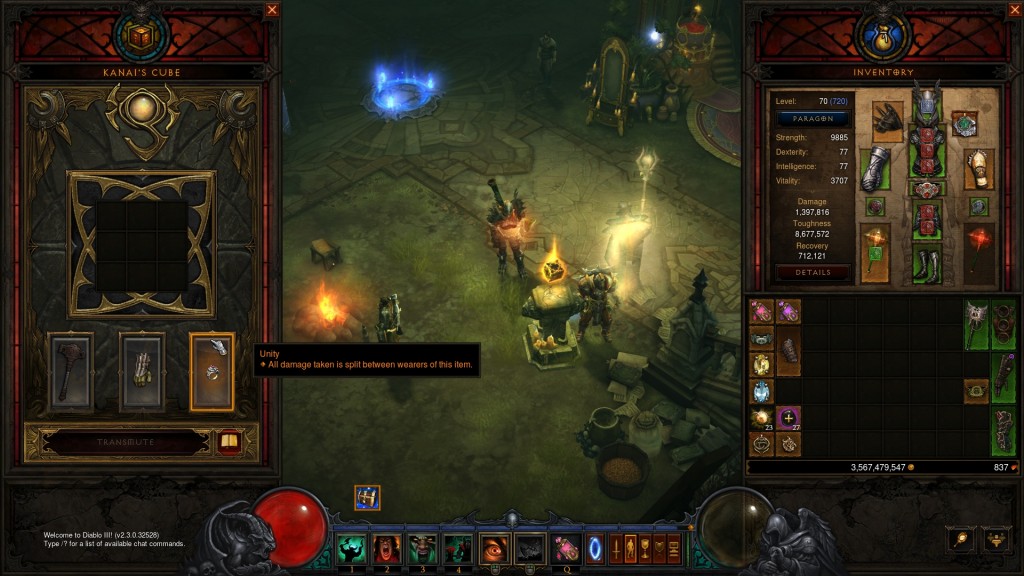 Although people have said that currently on the PTR the Immortal Kings set is bugged with regards to the 6 set bonus, I decided to give the Seismic Slam Barbarian another go. This blog discusses the gear and skills for a reasonable Seismic Slam barbarian and potential alternatives if you lack a piece or two.

Immortal Kings is what I consider a bridge set, that is something you can use to combo different gear and swap things in and out for numerous builds. It revolves around your Call of the Ancients and Wrath of the Berserker for the most part but how you compliment the set with damage depends on your gear and preference of playstyle. For myself, I’ve been a pretty big fan of Seismic Slam as it turns the Barbarian into a semi-ranged attacker, which is why I decided to go this route with a pure Immortal Kings set build.

The gear blends a mixture of utilizing pets through your Call of the Ancients, some resource reduction so you can spam Seismic Slam and having a small amount of crowd control in knocking your foes up. One nice thing about this build is that you can vary your offense slightly depending on the weapon you have where you can emphasize having your Ancients or Seismic Slam do more damage.

Beyond the 6 piece Immortal King set, you will want to obtain a Fury of the Ancients shoulder piece, which will give you all runes for Call of the Ancients, Bracers of Destruction, which increases your Seismic Damage for 300-400% on the first two enemies it hits and a Fury of the Vanished Peak as it will reduce the resource cost of Seismic Slam and increase its damage. Without Fury of the Vanished Peak, you’ll find yourself resource starved constantly.

Additional pieces of gear you will want are a Focus and Restraint for the boost in damage, Tasker and Theo for the increase in attack speed for your pets and possibly The Furnace or Immortal Kings Boulder Breaker. Ideally, you will have an ancient Fury of the Vanished Peak because of the increased damage for Seismic Slam. Then you can increase your elite damage through using The Furnace in Kanai’s Cube. Similarly, you will want to cube Tasker and Theo so you can use the full Immortal Kings 6 set bonus without resorting to a Ring of Royal Grandeur. For your jewelry slot, you can go with a Unity in solo play if you find yourself a bit squishy or a Convention of Elements since you cannot cube a Stone of Jordan. Also, if you can manage it, you probably will want a Hellfire Amulet but that goes without saying.

For your skills, you will obviously want Seismic Slam. I choose the Shattered Ground rune for the knockback effect. Also, it converts your damage into fire, which works with Call of the Ancients’ rune The Council Rises. For your generator, you have quite a few options. At first, I went with Frenzy because I wanted to try The Undisputed Champion belt, which gives Frenzy all runes. This is when I used the Immortal King’s Boulder Breaker as my weapon. Once I found an ancient Fury of the Vanished Peak, I discarded my Immortal King’s Boulder Breaker and swapped back to the Immortal Kings Tribal Binding belt.

Right now, I have Frenzy with the Vanguard rune for a small increase in movement speed. However, you can switch Frenzy for any generator. For instance, you could go pure ranged by using Throwing Weapon. The important point is simply to have a mechanism to proc the Bastion of Will generator damage bonus. For the most part, you shouldn’t have any Fury generation issues since your Ancients will be the ones responsible for your Fury generation along with the minimization of Seismic Slam’s cost via your weapon.

Your next two active skills really depends on your playstyle. I use a more defensive build and employ War Cry with Impunity for increased resistance and Ignore Pain: Iron Hide. That does mean you’ll feel slower than say a Whirlwind build but you should be avoiding a lot more damage too in some ways.

For your passives, I go very offensive with Brawler, Rampage, Berserker Rage and Ruthless. Brawler might seem like an odd choice considering that the design is focused on ranged attacks. Quite often though I find myself mixed up in melee whether I want to or not. So it seems like a reasonable choice. I avoid Fury generators because I never have Fury generation issues. You could go more defensive if you’re encountering too much damage. So this is just a suggestion based on my experience.

Gem-wise, I ended up going with Bane of the Trapped, Enforcer and Gogok. Bane of the Trapped gets proc’d through Seismic Slam’s Shattered Ground knockback effect and Enforcer is to improve my ancients’ damage and resilience. Finally, Gogok helps with cooldown reduction, which mostly is for Ignore Pain and War Cry as well as more uptime on Wrath of the Berserker.

What I like about this build is that it’s straight forward, no nonsense and does reasonable damage. I see myself hitting on average for 300-500 million. Also, my ancients help take care of stray mobs. Once in a while my ancients get jammed, so I just resummon them. This is really important for times when they might get CC’d through Frozen or stuck in a room.

Either way, give it a shot and play around a bit with some skills and gear. At least for myself, I found the style to be enjoyable. I might swap some skills or gear here and there. Overall, the game play is smooth once you get into it.