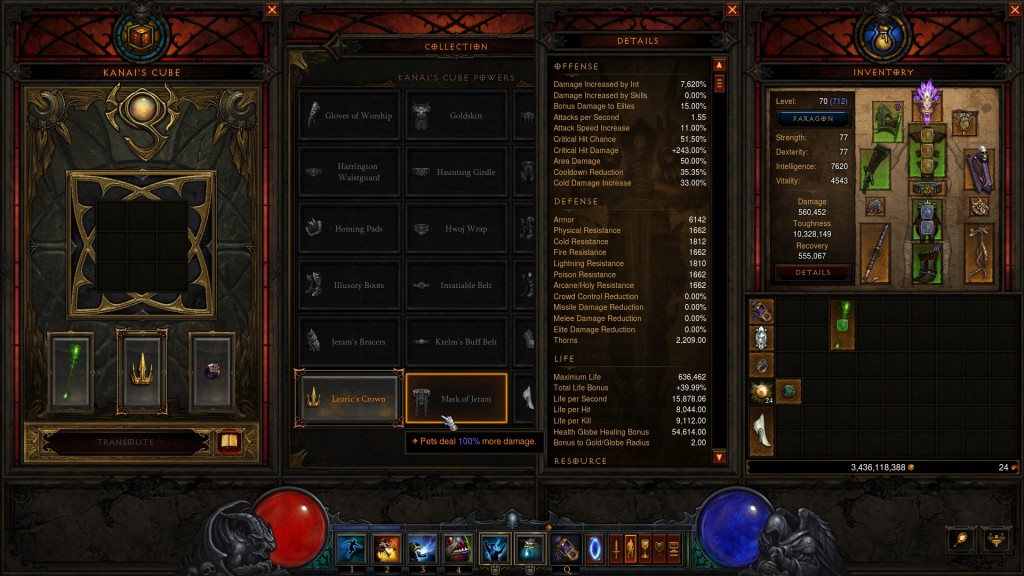 The main issue with Jade Harvester prior to Patch 2.3, even after the changes to the set, was cooldown reduction. I believe it was one of the more difficult builds to play mostly because everything was about timing. Also, the gear you needed to perform at a respectable level for higher Greater Rifts was somewhat out of reach because of conflicting requirements. Naturally, you would need the Quetzalcoatl which eliminated being able to use a Leoric‘s Crown. So rather than being able to get a full 25% cooldown reduction you would have to settle for 12.5%. Not to mention you were forced to eek out cooldown reduction on every slot possible, which made the build a nightmare if you couldn’t find the gear. Also, when the Wormwood staff gained the Locust Swarm ability, you would been tossed into the spot of deciding whether to use that weapon or The Furance.

With Kanai’s Cube, you can now solve a lot of these issues. The way I’m looking at the new setup, you will want to use the Ingeom weapon for reducing your cooldowns (mostly Soul Harvest) in attacking elites and Obsidian Ring of the Zodiac that will reduce one of your cooldowns by 1 second via a spender. You will accomplish the later part via Haunt and you will probably want to employ a Haunting Girdle to double your damage output.

For your remaining gear, you can either go full 6 piece and eliminate a Ring of Royal Grandeur then put the Quetzalcoatl helm as your armor passive and use another ring such as Unity or you could do something interesting like use The Tall Man‘s Finger along with an Uhkapian Serpent. Some people might just use the Wormwood and go with the In-Geom as their weapon passive, but I prefer the reverse since you can get more cooldown reduction from the weapon/off-hand combo. The main thing you’d lose going that route rather than using the Wormwood is poison elemental damage.

You still will want decent CDR so you can use a Leoric’s Crown for your armor passive and try to maximize your CDR that way. In turn, you gain a little more flexibility in removing CDR from spots like your other ring and amulet. I haven’t yet fully tested this build but the other option I’m looking at is trying a Hwoj Wrap instead of the Leoric’s Crown if I end up finding the CDR from In-Geom and the Obsidian Ring to be sufficient.

I feel you probably can get your CDR down to around 50%, which will turn Soul Harvest into an 8 second cooldown. That means you essentially need to spam Haunt a few times along with your normal rotation. This definitely is going to be a lot better when dealing with bosses since you won’t have to just be kiting the entire time and can actively reduce Soul Harvest and possibly Spirit Walk.