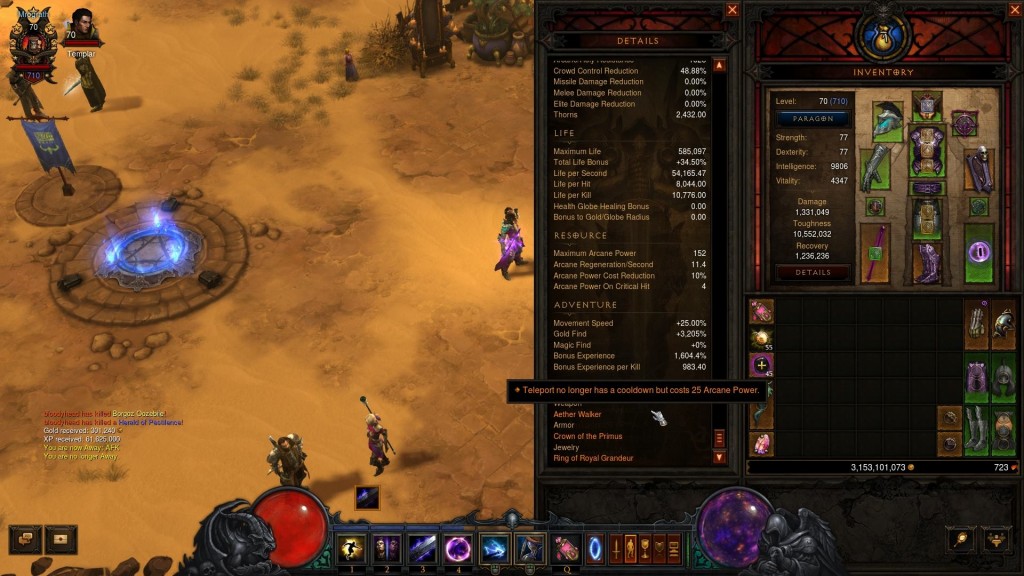 Last night, I gave the latest PTR build for Patch 2.3 a spin. Fortunately, there wasn’t a lot of people on and I successfully got in. That allowed me to complete a good number of bounties to finally start unlocking legendary passives and allow me to play around with a few ideas and experiment with different Torment difficulties as well as try some Greater Rifts.

I started off with my barbarian this time around as I wanted to just finish up the Act 5 bounties to start unlocking the legendary passives. I ended up going with my Unhallowed Essence Demon Hunter first though when I started to unlock various passives. Right now, I’m going with a fairly standard Unhallowed Essence build. I managed to find a new Dead Man‘s Legacy since Season 3 items are starting to drop for non-season. Along with that I’m using an ancient Odyssey‘s End and substituting Evasive Fire: Focus for Entangling Shot: Justice is Served for the slight damage boost while I hunt for the new Yang’s Recursive Bow. For my passives, I’m currently using Calamity, the new Hunter’s Wrath belt and going Double Unity (although I started with double immunity amulets).

Pretty much this build wrecks things. So far I’ve pushed up the difficulty to Torment 8 without any problems. The Double Unity helps tremendously as it resolves the glass cannon build problems from before. For group play, I imagine that you could just go for the Convention of Elements for the burst damage. I thought about giving a Stone of Jordan a shot because of the increase to discipline (among other things) but it’s not listed among other jewelry, probably due to the various powers that a Stone of Jordan provides.

Of course, the thing I’m searching for the most at this stage is a Yang’s Recursive Bow for the resource reduction on Multi-shot. Another thing I’m considering is not using the Hunter’s Wrath belt. The increased attack speed and damage with generators are nice but I think once you get Yang’s Recursive Bow, you will only be using generators to proc the Bastion of Will. The problem with generators in general is that they don’t do enough damage. Even something like Entangling Shot, the speed is abysmal as well as the area. So, I’m thinking of trying Cindercoat instead and swapping out my Reaper‘s Wraps for the hunter bracers. For group play, I could get rid of Unity for the Convention of Elements.

Ideally, I would like to get an ancient Yang’s Recursive Bow. Then I can use the weapon passive for something else. For instance, current Dead Man’s Legacy is pretty bad. However, my Holy Point Shot rolled a LOT better and I would prefer gaining the elemental damage rather than the Calamity additive bonus from Marked for Death. Or I could use an ancient Balefire Caster just for the elemental damage in conjunction with Yang’s Recursive Bow for the passive.

The other build I decided to try was my Delsere’s Magnum Opus/Tal Rasha 3/5 build. As I discussed in my previous blog, the main passives I wanted to aim for was Aether Walker and Crown of the Primus. Currently, Leoric‘s Crown is bugged on PTR (which I did try to see if I could gain more CDR) so I ended up going with the two items mentioned above. Also, I swapped out my Ring of Royal Grandeur into a passive and replaced it (along with my Convention of Elements) as Focus and Restraint. The result? One of best farming classes around!

The original build is cooldown intensive. And part of the dependency of the build is taking enough damage from Illusionist to reset the cooldown for Slowtime, Teleport and Mirror Images. The new build lets you hop around near endlessly. If you use Reaper’s Wraps for the resource regeneration, you will have a fair amount of Arcane power to supply your teleport. The combination of these items along with Nilfur‘s Boast for the Meteor Damage and Gesture of Orpheus for the cooldown reduction on Slowtime makes this is great build for quick farming.

One problem I encountered though was occasionally getting locked up by Teleport. I’m not sure if the conversion to a resource spender is bugged but I kept hearing the cooldown not being ready message when I tried teleporting. And the thing is that I have Aether Walker as my passive and would do this with sufficient resources. It could be coming from my attempts at spamming other things like Slowtime but I’ll have to double check on this.

It’s still a little clunky but I really love the fast, intense game play. There’s lots of CC, defense and area effect with this build. With this build, Wizards won’t have to worry about keeping pace and can serve as a support type and scout. Highly recommended build you should try.

Another build I tried was an updated Whirlwind Barbarian. I have most of the basic Whirlwind Barbarian gear, including Bul’Kathos, and Pride of Cassius. My amulet is not good and I’m continuing to farm for something better (hopefully a GG Hellfire Amulet or immunity amulet). That said, the build I went with included the passives from The Furnace, Chilanik‘s Chain and Xephirian Amulet. The idea behind this build is higher elite damage, faster farming and immunity to electricity, which generally has been my Achilles’ Heel when it comes to fighting rift guardians.

Pretty much your damage resistance will be high due to Whirlwind, extended Ignore Pain, Taeguk’s armor stacks and Health Globes dropped from Battle Rage: Swords to Ploughshares. So pretty much you’re gaining more speed, higher elite damage and solid resistance. Of course, a damage immunity amulet against poison for Ghom or a well rolled Hellfire Amulet can do wonders for a build like this. But I’m sure I can push a few more rifts higher without thinking using this build.

Next, I went Natalya’s Strafe/Rain of Vengeance. I’m not using the Bastion of Will for this build. Instead, this build is more of a speed farming build. So my setup is using 5 piece Natalya’s + 2 piece Marauders. The idea here is to gain more hatred regeneration from activating companions. I use Taeguk for the armor increase and high damage buff, Wreath of Lightning for increased movement and Zei’s Stone of Vengeance. For my three passives, I ended up going Calamity, double Unity and Leoric’s Crown (which in reality was futile). I only did this due to my limited time and not having unlocked everything as of yet (not to mention not realizing that Leoric’s Crown is bugged).

Unlike most other standard Natalya’s Strafe/Rain of Vengeance builds, I use an ancient K‘mar Tenclip for the addition of the Drifting Shadow rune. Right now, I can zip around pretty fast and clear areas impressively fast. My main weakness is constant resource starvation either from lack of Discipline or Hatred. Even with Preparation: Focused Mind, Companion and Vengeance: Seethe, I still find myself depleted.

Now, something I’ve seen is using Goldwrap with a Boon of the Hoarder for speed burst. Some people prefer using Profane Pauldrons for the pickup radius to gain health globes. I’m thinking that the 2 piece Marauders can also help with the ferret companions if you go this route. You could replace Zei’s with Boon of the Hoarder in this case. Then you’ll have a ton of toughness and speed.

Part of thing about this build is that it’s a no-generator build. That’s partly why I don’t use the Bastion of Will set. Obviously, for progressing Greater Rifts, you’ll probably switch out your rings and use a Ring of Royal Grandeur for your passive. Also, you could remove companions for a generator like Evasive Fire. But the main thing is that this build is my personal farming build and I really enjoy it.

The last build I tried is my Pet Doctor build. Now, I want to be straight forward and admit how I totally jacked up the build. I accidentally sharded my Belt of Transcendence so that I could use it along with The Witching Hour. My damage did shoot up as a result but it was the wrong build. The build I wanted to go for was swapping out my Ring of Royal Grandeur in place for a Zunimassa‘s Pox and get rid of the set gloves in place for Tasker and Theo. I suppose I can still do that build but I need to get more materials. That allows me to keep the higher damaging Witching Hour and use my Belt of Transcendence while gaining attack speed. For my weapon passive, I went with The Furnace again although in my current iteration, I’m using double Unity.

So the build itself is pretty nice. You’ll have your Big Bad Voodoo up most of the time with the Starmetal Kukri and you’ll spawn fetishes quickly through the Belt of Transcendence, allowing you to give up Fetish Sycophant. Piranhado though loses a lot of efficacy because of the nerf to CC. I think if I manage to get the passive from Tasker and Theo, my fetishes out to destroy things pretty fast and I’ll have a near permanent Big Bad Voodoo buff. But my main problem is lacking a well rolled Tasker and Theos to make the build work as well. This is why losing my Belt of Transcendence was such a huge mistake. Right now, having the belt gives me more flexibility until I can find a perfectly rolled Tasker and Theo, which is near damn impossible. So I’m better off just taking the passive from it.

Another idea I’m toying with is checking out cooldown reduction items like In-geom and Obsididan Ring of the Zodiac. Pretty much you’ll be able to keep Spirit Walk and Piranhado up much more potentially and might be better in group play. You would have to sacrifice damage since you cannot relegate your Ring of Royal Grandeur in favor of the Zunimassa’s to get back your Tasker and Theo though.

This weekend if the PTR isn’t crowded, I would like to try a few other builds like Seismic Slam/Weapon Throw barbarian (if I can find the gear), some monk variations and Bombadier Crusader. Already, I’m pretty excited with the builds I did manage to try so the upcoming patch is going to be great.