Of all the existing builds right now, the Gears of Dreadlands Hungering Arrow Demon Hunter build might be my favorite of all time. In being super fast, tanky, high damaging and capable of multiple scenarios, it has a versatility that’s hard to beat. With the addition of Ethereals, a few things will change but mostly in damage output. I will first talk about the basic gear without Ethereals then follow up with a few alternatives for the build once Ethereals come into play. 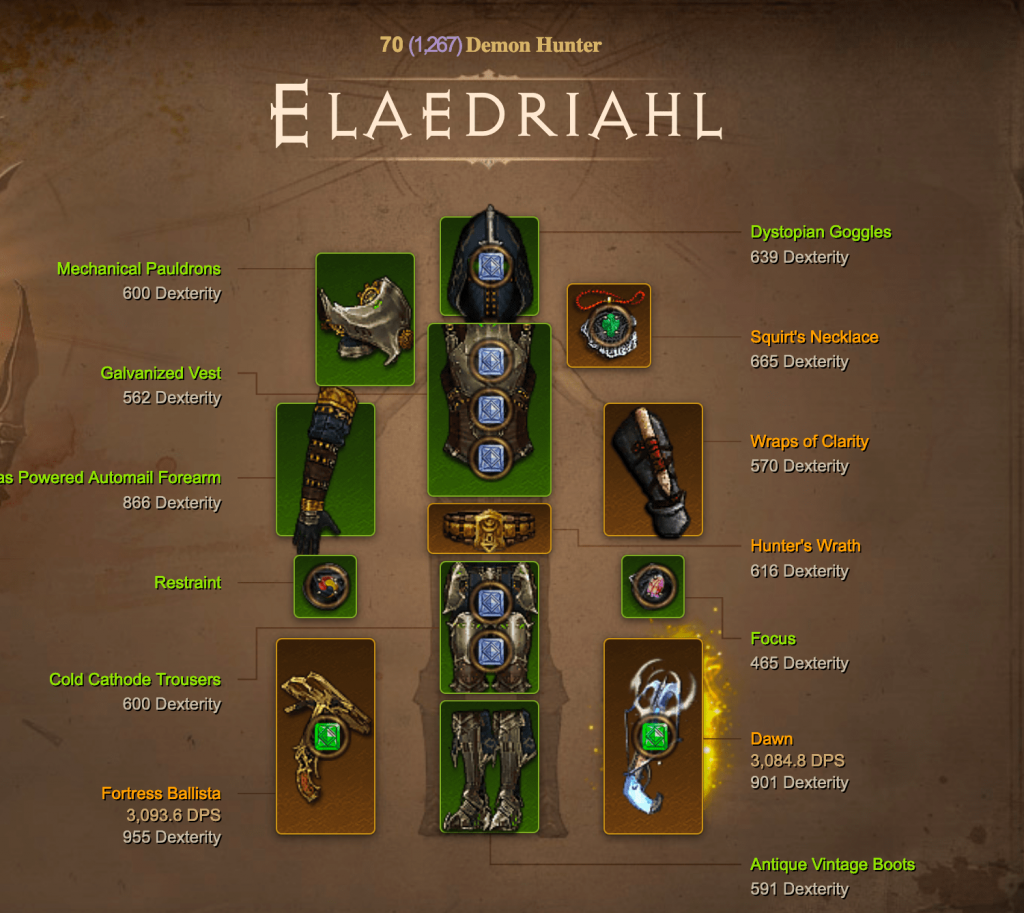 There are a few optional items beyond the ones I have mentioned for specific situations:

For Ethereals, there are a few choices depending on what you need. My choice is Doomslinger because it’s a 1-hander that allows for either a Dawn, Fortress Ballista, Vella’s Bequest or The Ninth Cirri Satchel to be used in the offhand slot, giving you more overall flexibility. Also, I tend to use Archery with two 1-handed crossbows to get the additional Hatred per second since you will be Hatred starved in trying to keep up Strafe. If you do end up with this, then you can swap around any of the four legendary powers above being used here and mix and match.

Buriza-Do Kyanon, Ballista is another interesting option because of the supplemental Cold damage, the high freezing capability and extra armor. However, your offhand would only be The Ninth Cirri Satchel. But I imagine this will be the highest damage you can achieve. Also, I would choose a different passive than Archery to find ways to generate Hatred.

Lastly, the Windforce, Hydra Bow is still an option but not a great one compared to the other two. Again, you will only be able to use The Ninth Cirri Satchel as an offhand, leaving you with Dawn for the Cube and another power. The extra movement and Knockback aren’t special for a build like this and the Strength bonus only helps improve your armor. Lastly, the bonus damage for Archery will only apply to Strafe not Hungering Arrow which is why I think this is one of the worst choices.

I don’t really see a bad follower in this situation. All are pretty useful. My follower of choice has been the Templar though. I find myself resource starved from time-to-time so the Templar’s Inspire helps. Also, their occasional CC can help with Numbing Traps or Cull of the Weak.

The Enchantress could be useful for some CDR, cheat death and armor. But I find myself more in need of resources than CDR with this build where the Templar acts as a spare battery for me.

This is my 2nd character I plan to make for season 24. I found this build to be the best all-around build around. It does not have the same sketchiness in using a Squirt’s Necklace as a Monk Patterns of Justice build does and is pretty tanky in situations like exploders or high damage enemies.

The only problem I’ve seen is that more powerful Greater Rift guardians can shut this build down because of how the number of piercings from The Ninth Cirri Satchel got reduced down to 4. So as a pusher, it won’t be as strong. But I’ve found with basic gear, you can easily hit GR70 without much worry. I think the Ethereal ought to boost the damage up a bit more but won’t dramatically make or break this build. It’s still fairly static with a few variations that can exist without the Ethereal. But it all depends on your purpose in the end.