Barbarians will see a slight alteration with the introduction of Ethereals during Season 24. Most Barbarians use a combination of the Wrath of the Wastes set and either Bul-Kathos’s Oath (for lower level farming) or Istvan’s Paired Blades for higher level Greater Rift pushing. The introduction of Ethereals will alter the meta slightly and this guide will provide 1-2 setups for those who manage to pick up some Ethereals. 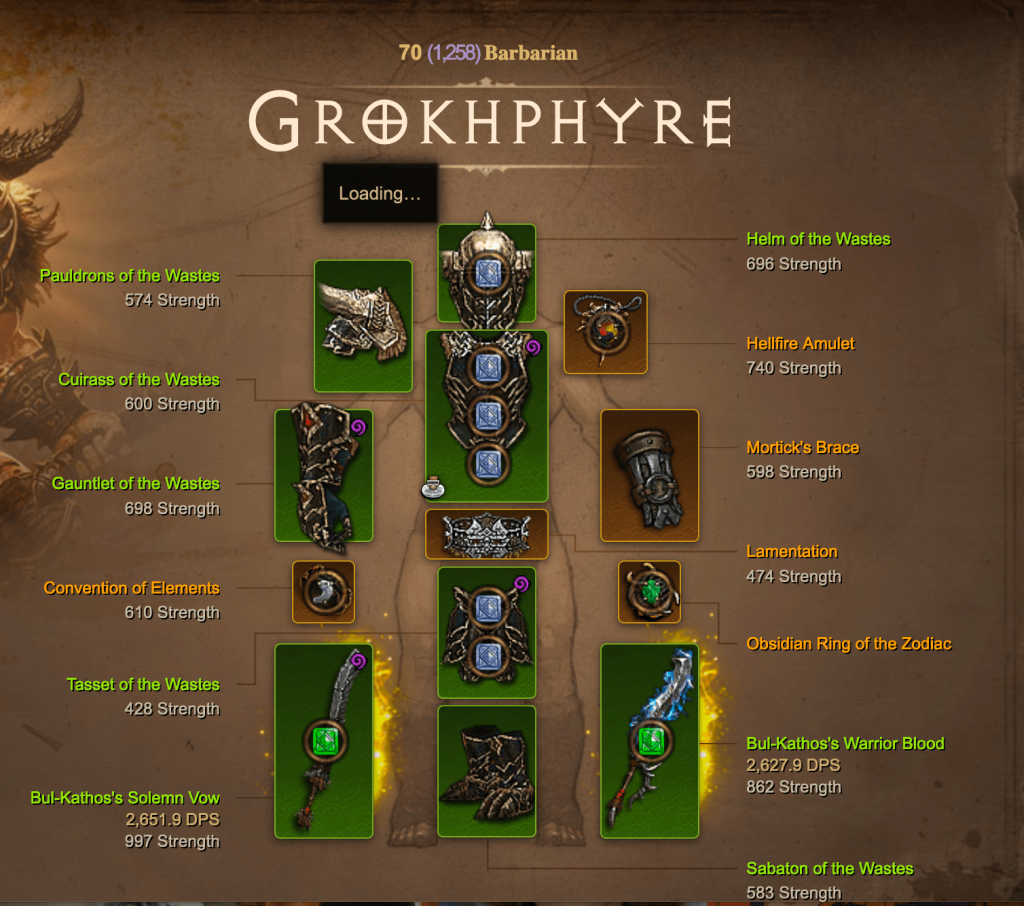 For the basic setup, I see the following pieces being used:

Now, for the Ethereal, there are two weapons I see being used. Either The Grandfather 2-handed weapon or a Doombringer. From my understanding, The Grandfather might end up becoming the best-in-slot choice here because of the huge amount of damage and other affixes it can roll including both cooldown reduction and critical hit chance.

On the other hand, the Doombringer is a one handed weapon, which means you can use another solid weapon in your offhand. However, it won’t have as much damage, nor have the cooldown affixes which can be critical for a Barbarian. It can provide some damage reduction, which is great while one can search for cooldown reduction elsewhere.

What matters, of course, is the legendary power on the Ethereal. Of the possible ones, the best in my estimation in order are:

If you manage to find a good one hander, you should find a complimentary one hander from the list above then use a cubed power from the list. For myself, I ended up dual wielding a one handed Ethereal with the Ambo’s Pride power and an Echoing Fury while using the Messerschmidt’s Reaver power in the cube. I know most people on PTR were using The Furnace but I think The Furnace works best when you’re pushing. At lower levels, you will value your cooldowns since it will be harder to generate Fury with everything dying quickly.

Skill-wise, I found the following setup to be useful without the Bul-Kathos mighty weapons:

Passive skills are going to depend on the passive you manage to score on your Ethereal. That said, you might be looking at between 5-6 passives for a Barbarian, depending on whether you feel okay with using a Squirt’s Necklace over a Hellfire Amulet. With that in mind, I will list out six passives I think will be worth using here.

With regards to choosing a Follower, my recommendation here would be to go with a Templar for resource generation. Without the Bul-Kathos mighty set weapons to provide constant Fury generation, you will be searching for additional batteries for resource generation. Also, a Templar is good for providing extra healing but in taking the Inspire over Guardian as a skill, you will lose out on a cheat death. So in that situation, you might go with Nerves of Steel.

Alternatively, you can choose an Enchantress for a little more cooldown reduction, bonus armor and a cheat death. However, if your Barbarian is also your starting character, you will end up not maximizing the gear for intelligence for your Enchantress which will improve things like her cooldown reduction for you.

In my experience with this version of the build, the biggest hiccup I immediately encountered was being out of Fury constantly. Because of that issue, I could not maintain Whirlwind at 100%, which is why Sprint with Marathon became critical. Empty areas in particular pose the greatest issue, especially if you need to backtrack. Generally, my strategy was to attempt to maintain Wrath of the Berserker and give myself a burst of Fury through War Cry whenever I encounter foes. I could also use Ground Stomp to gather up my goes and quickly mow them over with a slight generation of Fury.

I will admit that my endeavors were on lower levels of content. So I never felt threatened nor damaged too seriously. Instead, my biggest obstacle was keeping up Whirlwind or Sprint just because my Fury would be eaten up quickly especially in emptier areas. I might’ve switched from a badly rolled Hellfire Amulet to a Squirt’s Necklace too to improve my damage.

In addition, I saw a few alternative builds such as replacing Ground Stomp with Furious Charge. In that situation, Sprint also was used and I see the two abilities as a way to speed across areas while Furious Charge could be used to help generate your initial Fury, depending on the rune taken here.

Another thing you can do is alter the ring setup slightly. For instance, using a Focus/Restraint combination rather than depending on a Convention of Elements to cycle through to physical damage. In that scenario, you can use either Furious Charge or Ground Stomp to keep up the bonus generator damage. However, you will lose out on either a Band of Might for damage reduction (which can be made up through the Doombringer’s damage reduction affix) or an Obsidian Ring of the Zodiac (which likewise can be made up through an In-geom and/or Messerschmidt’s Reaver combination). So there is quite a bit of room to experiment there.

At any rate, there’s no doubt that finding a solid Ethereal will be the way to go for a Whirlwind barbarian in Season 24, especially in pushing higher GRs. The various affixes will allow more flexibility  and damage that should give you a few more GRs when you find a good one.