I already have another write up of this build as a review, but I want to spend some time revising it to make use of Ethereals in the upcoming Season 24. In the previous build, Norvald’s Fervor is employed. However, Ethereals will be better than Norvald’s Fervor in my view, although the build itself won’t alter too drastically as well as make the play style a little more reliable. 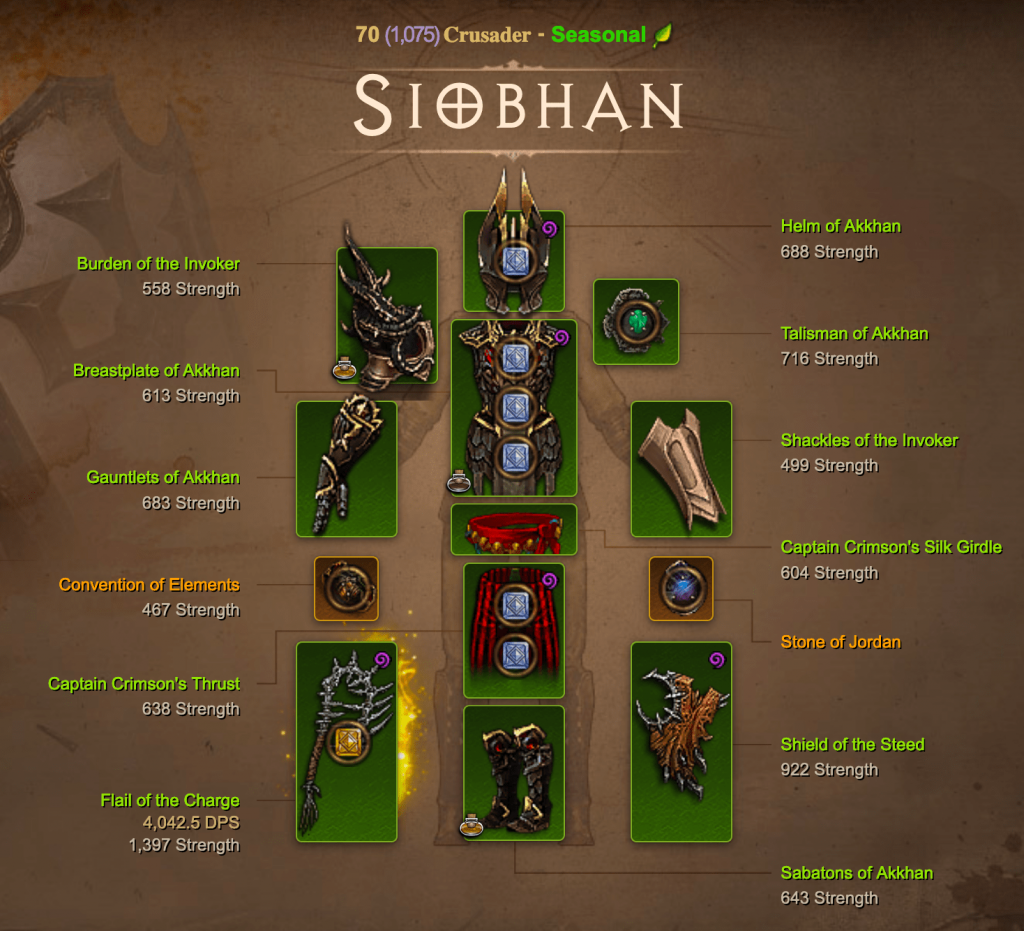 Most of the pieces of armor and the amulet slot are non-negotiable. You will want to attempt to roll cooldown reduction where possible such as shoulders, gloves, amulet, rings and shield. I believe the Ethereals come with CDR so this might not be a major problem there.

Unlike most other builds, you do not want critical hit or critical damage on places like your helmet, etc. Instead, you will either want to reroll secondary stats for Thorns damage or more defensive stats if you manage to get it already. For your bracers and amulet, you will want to try and roll physical% damage as your thorns will be doing all physical damage through Bombardment. I believe the goal for this build is to try and hit roughly 59% CDR to keep Akarat’s Champion up 100% of the time.

Block Chance is the big thing here beyond CDR because it’s what will help reduce your CDs due to your shield as well as improve your damage reduction with the aid of a Justice Lantern. I imagine that depending on what those values are, you might be able to play around with a Unity and Convention of Elements to figure out what works best for you here.

In terms of the Ethereal of choice, I’m looking at The Redeemer. Of the three Ethereals for Crusaders, The Redeemer has a few really nice bonus damage affixes against Undead and Demons. The attack speed bonus can be nice when paired with Punish as you’re building up stacks to increase your bonus Thorns damage. Lastly, the Health Globe radius increase should be a good quality of life bonus that works well especially in Greater Rifts.

The only follower I think worth taking here is an Enchantress. Improved cooldown reduction, a cheat death and bonus armor does well for a Crusader. The only stigma is getting intelligence on the gear.

Because I did have a chance to try this build out on the PTR, I did find it pretty fun, tanky and still able to do damage. I felt it was better than the Norvald’s Fervor version just because the cooldown reduction aspect felt more reliable. I didn’t have to use a conflicting Gogok of Swiftness where my dodge value would be ignored just to get a few more percentage points of CDR.

Most of all, Akarat’s Champion felt more reliable in general, which is what ends up being the sketchy part of this build. Without enough cooldown, this build falls apart and forces the player to wander around aimlessly until either Bombardment and/or Akarat’s Champion at the very least become active again. Against a Greater Rift Guardian, this issue becomes very apparent.

I did see a few variations on PTR with this build such as the Ivory Tower being used rather than The Furnace. But pretty much the weapon seems to be the only piece that’s capable of some switching as there is very little room for changing things here. Also, the fact that you will need the Captain’s Crimson Trimmings means you will also have to farm bounties just to get the right rolls and to make it ancient (unless you’re supremely lucky).

That said, I prefer this version than Norvald’s Ferver since I’m not trying to activate Steed Charge as much as possible just to keep my bonus damage up. Also, I think Bombardment will be more controllable since Akarat’s Awakening becomes a key part of this build.