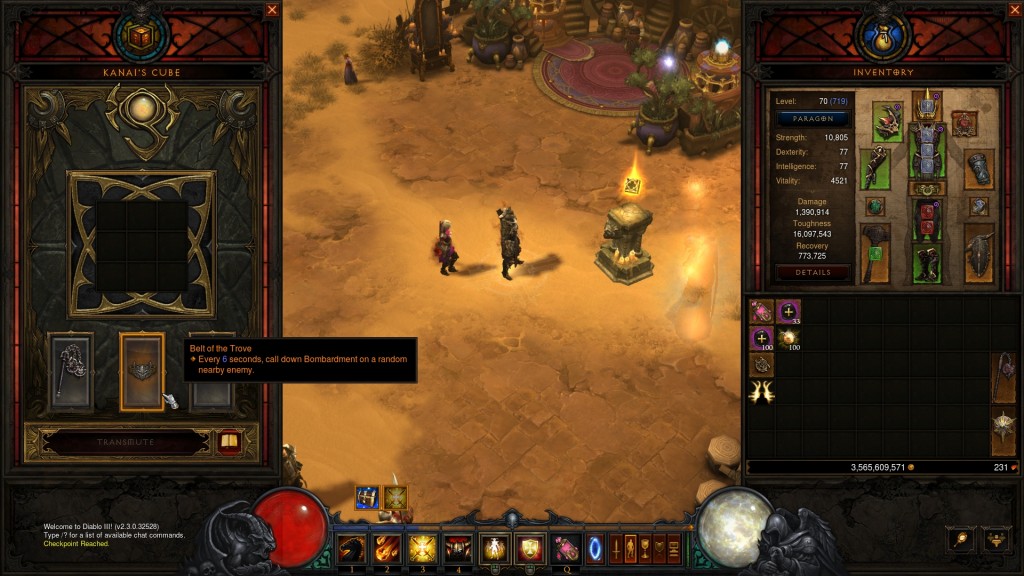 While the Stampede crusader no longer is a high end build, it’s still playable if you want to just try something a little different in patch 2.3. Season 2 introduced the Belt of the Trove to enhance the crusader up. However, the Bombardment build never really became a mainstay since that point in time. Patch 2.3 offers the opportunity to use Bombardment through Kanai’s Cube. This post discusses the basic build and gear used for this build.

The classic Phalanx: Stampede Crusader build utilized the 5 piece Armor of Akkhan set with a Leorics Crown, Vigilante Belt, Strongarm Bracers, Unrelenting Phalanx for the shield slot and The Furnace or a Heart Slaughter for your weapon. The build is heavily cooldown focused, hence requiring an 8% CDR Vigilante Belt and Leoric’s Crown as well as CDR on your weapon, shield, gloves and shoulders at the very least. You would try to get around 50% CDR to maintain Akarat’s Champion: Prophet up at a near 100% of the time as the ability would boost your damage, armor and increasing your Wrath regeneration.

With Season 3, we now have the revised Obsidian Ring of the Zodiac which reduces one of your cooldowns each time you use a spender. That item gives some flexibility to your build since the build has you spamming Stampede and refueling your Wrath via Shield Glare and further reducing the cost of your Wrath skills with Laws of Valor: Unstoppable Force. Since Kanai’s Cube allows for a jewelry piece, the Obsidian ring becomes a must-have for this build and should be used in that slot.

For your active skills, you should be taking Phalanx: Stampede as your primary damage attack, Shield Glare: Zealous Glare for generating Wrath, Steed Charge for your movement booster (I use Rejuvenation for self-healing), Akarat’s Champion: Prophet for the armor boost, Laws of Valor: Unstoppable Force for being able to spam Stampede cheaply and Bombardment. In the past, you would take Provoke to help with the burst of Wrath regeneration. Here, I suggest going with a runed Bombardment like Impactful Bombardment since you’ll have a large amount of AoE. Without the rune, you would get a plain Bombardment with just the belt so you have to decide which is more important for you.

For your passives, you should be going with Heavenly Strength (which pretty much is mandatory no matter which weapon you use of the three suggested above), Long Arm of the Law (for the increased duration to your law), Finery for bonus armor and strength/damage and finally Lord Commander for the cooldown reduction to Steed Charge, Bombardment and the increase in damage to Phalanx.

Now, I tend to go with adding Bombardment as my active skill set since the Obsidian Ring helps to reduce my cooldowns anyway. That just gives me more opportunities for targeted destruction.

The reason why I like this build in particular is that it addresses some of the basic issues with pure Phalanx: Stampede builds in that your AoE damage is non-existent. You still get to keep Phalanx: Stampede as a fairly decent single target attack but you add the devastating AoE, which can really help in dealing with tricky areas that Stampede normally cannot get to while firing. I have yet to try the new Crusader set so I cannot compare both sets as of yet. Just in playing for T6 though, I did feel a significant increase in performance to my playstyle and I had fun while doing it.