With the Spirit of Arachyr being the officially announced Witch Doctor set for Season 24, I figured it would be a good time to write up an updated build guide for this set. 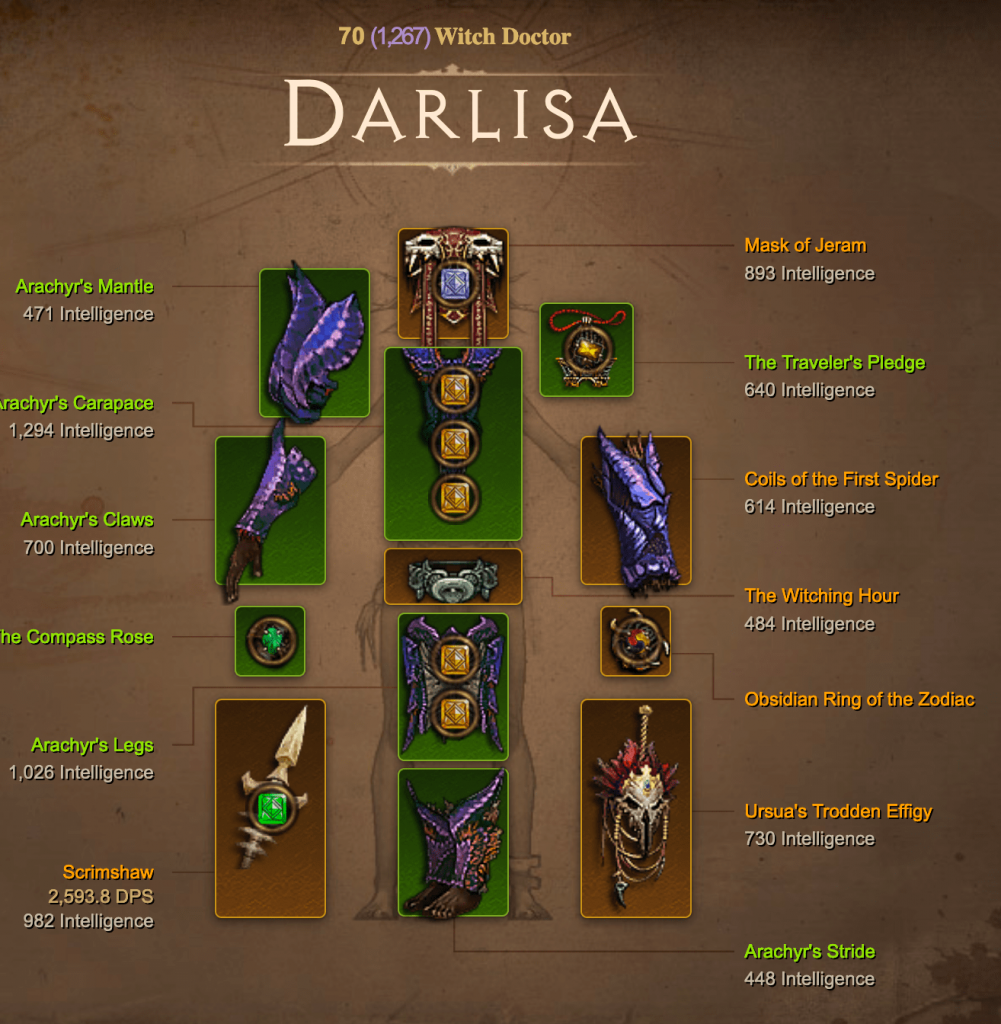 There are some other high end builds that differ slightly in gear choices. So I will post a few extra items that can be taken into consideration here, especially with the Ethereal changing the legendary power game around slightly.

With regards to Ethereals, I have a few additional thoughts about the best choices. The main Ethereal I think will go well with this build is The Gidbinn as you gain more movement speed as you pick up health globes. I value this quite a bit because I find this build to be slow and more melee oriented, so the health globes will help greatly in farming.

For the legendary power of choice, I suggest the Staff of Chiroptera because it’s mandatory and a 2-handed item which means normally preventing you from using an offhand. So if you get an Ethereal with this power, you will have a little more flexibility in what you can use in your cube.

One interesting choice for the cube is a Wormwood to turn Locust Swarm into a passive effect that automatically applies the ability onto foes. The reason I like this idea is that it ensures with the Pestilence rune from the Vile Hive that you will be able to keep up Pestilence. Since you already will be channeling Firebats in melee range, it makes things much easier and saves you some mana as well.

Two other choices are The Furnace and Messerschmidt’s Reaver. Both weapons become an option as they are two-handers and normally would not be a possibility without sacrificing your offhand mojo. Here, you can use one or the other (similar to a Wormw0od). The Furnace would work well in high greater rift pushing situations while a Messerschmidt’s Reaver would be good for farming to keep your cooldowns up more often. However, you won’t be able to get the extra damage reduction bonuses from the Sacred Harvester and Lakumba’s Ornament so this really depends upon what you need.

I’ve been slowly trying to assemble the gear for this build. I’ve done it before and found it to be a decent starting build. It is a little slow for my taste and you will be pausing a lot in grouping things up to apply Pestilence, Firebats, etc. But the damage is pretty high. Also, it works very well with the Manajuma’s Way for speed runs if you need a faster version but you will need to change your Hex rune to Angry Chicken to get it to work. Because Manajuma’s Way got buffed, you can use that for higher difficulties but not upper tier but it might be good for cases like farming bounties or doing some Conquests that require speed.