From my experience on PTR, the Zunimassa Poison Dart build was one of the highest ranked Witch Doctor builds. The Ethereal provides a huge boost with a few key affixes on a well rolled one. While I have done another Zunimassa Pet build guide in the past, this one will exclusively focus on the Poison Dart version. 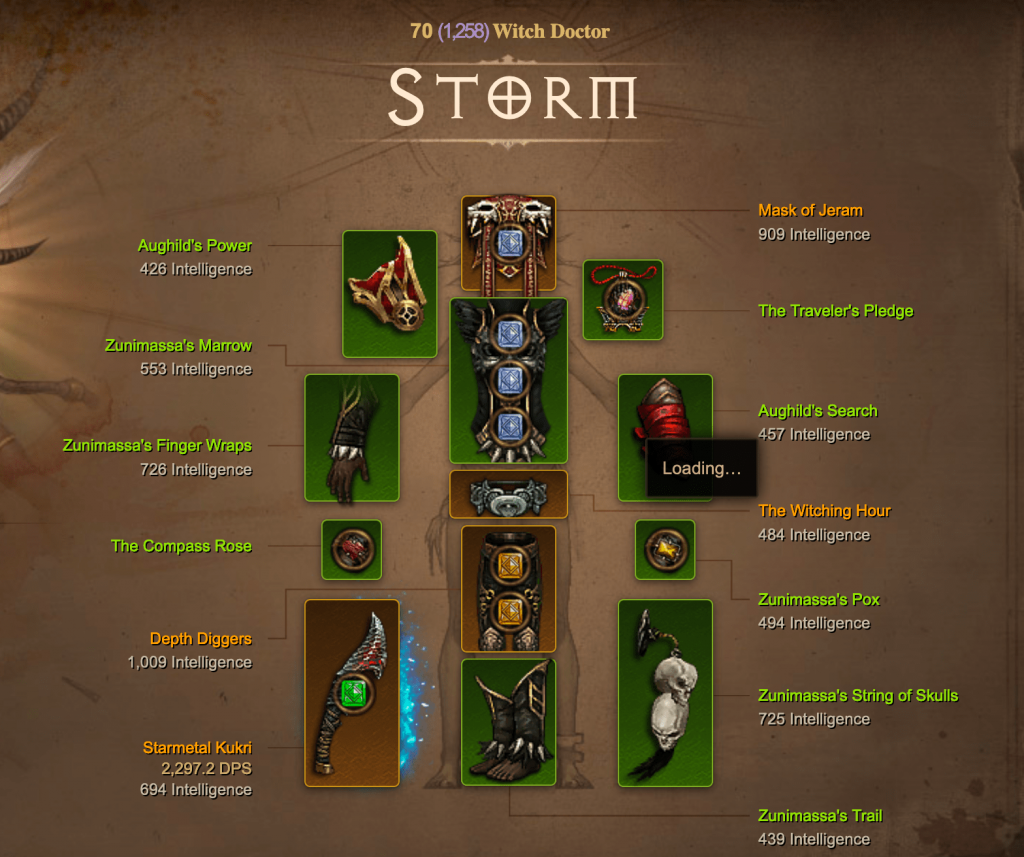 The main pieces of gear I suggest are the following:

Your Ethereal weapon should either have the Dagger of Darts or Echoing Fury legendary power. I would place the Dagger of Darts a bit higher and cube an Echoing Fury for a more generic purpose that you can use for other classes. The bulk of your damage is going to come from your minions shooting out poison darts so attack speed is critical on gear here (which is why we use The Witching Hour as opposed to a Belt of Transcendence). Similarly, Echoing Fury provides that boost of speed but The Furnace can be used in place of an Echoing Fury.

Both the Ghostflame and The Gidbinn weapons will be good choices with either Dagger of Darts of Echoing Fury rolled as the legendary affix. Ghostflame’s big bonus is increasing attack speed while The Gidbinn provides a movement speed buff. So I look at The Gidbinn as a better quality of life item used for farming while the Ghostflame seems better suited for higher level Greater Rift pushing. Also, The Gidbinn provides more critical hit and critical damage capabilities, which can help if your Compass Rose or Traveler’s Pledge ends up rolling poorly in those areas (which often they do)

A few honorable mention pieces of gear that can be used during the gearing up phase:

The three gems of choice here are:

Here are the skills for this build:

My main pick for this build would be an Enchantress for the cooldown reduction, cheat death and bonus to armor. In addition, you have better synergy with intelligence gear.

This build might be the build of choice for pushing using a Witch Doctor. The PTR demonstrated how this build ended up exceeding Mundugunu and Spirit Barrage. While I only tried Mungugunu on PTR, my feeling is that the single target damage and less reliance on cooldowns make Dagger of Darts a pretty interesting build that can scale. The Ethereal bonuses seemed to be able to push this build further and possibly having the Health Globes on The Gibdinn allowed for this build to go further with the speed boost.

However, my real concern is the squishiness for this build. This build is really about timing, positioning and skipping stragglers in favor of elites. But it does seem to have good potential coming up to be a farming build since you have a belt slot that can vary a bit and I suspect that gold farming will be quite good on this build.