I got burnt out on Path of Exile after grinding the last few leagues. The latest league didn’t really excite me so I decided to take a break and go back to some other games. One game that did intrigue me was Diablo 3 due to the new sets (particularly the Demon Hunter set). 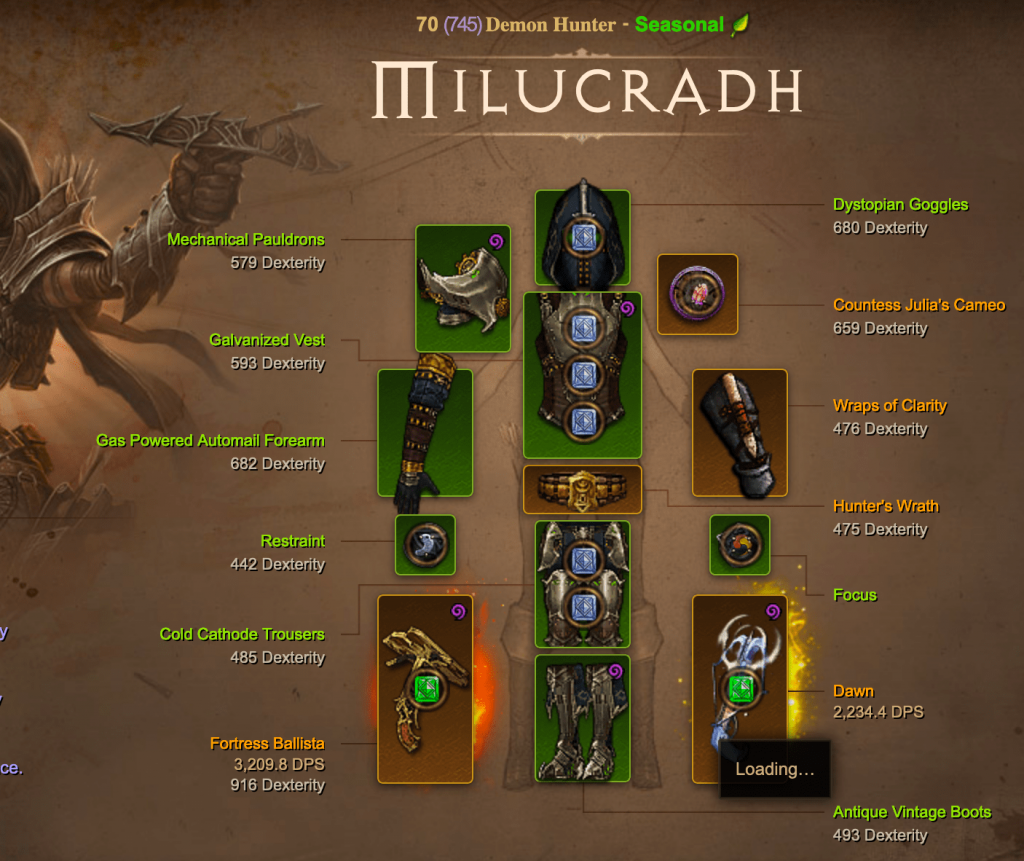 Aptly named the “GoD” set (aka Gears of Dreadlands), there is no question that this set is what to play this season. Nothing really comes close to the performance once you get the basic gear assembled. Even with crappy, unoptimized gear, you can easily hit GR 70 and unlock primal ancients in record time.

Thus far, I haven’t really pushed this character very far. My highest GR was 75 and I found it relatively easy. In fact, I farmed GR 75 to upgrade my gems to 70 to get the seasonal achievement and am sure that with better gear, I could push much higher.

The way this set functions is like a super powered version of the old Natalya’s strafe build, except that the star of the show is Hungering Arrow via The Ninth Cirri Satchel and various gear that boosts your generator damage. Combined with the set, where strafing fires your generators, you pretty much are piercing large groups of monsters and doing massive damage all the while taking very little damage.

What makes this set ridiculous though is the raw speed. Using Drifting Shadow as your Strafe rune, you gain a good deal of raw speed through that, Momentum via the set (as long as you keep up 20 stacks from firing your generators now and then) and can burst through areas via Smoke Screen Displacement, which also helps trigger your damage reduction from a cubed Elusive Ring. With all that movement, you can run through areas very quickly and take down hordes of monsters who cannot keep up.

Finally, you have damage reduction via Fortress Ballista and Wraps of Clarity, which gets triggered from firing Hungering Arrow. A lot of sketchy, high damage mobs that make me fearful on other builds practically run through all the ground effects, missiles, etc. with no effort.

Obviously, this build will eventually get nerfed (although I hope it doesn’t). But it might be the set that sees adjustment. I find that the Momentum portion is a little awkward because you have to rev the set up before blasting off in starting any area. Once you have a few stacks of Momentum, you only need to fire Hungering Arrow periodically to keep up your buffs.

The thing is that this is a good time to give this build a try because it’s really slick once you get the basics of the mechanics. I did make myself a 2nd set with Unhallowed Essence and it felt like night and day. While Unhallowed Essence feels less chaotic and more reliable, it also felt horribly slow and I gave up quickly on it.

Once I felt that my GoD DH was reasonably geared, I built up a barbarian and afterwards a monk. I mostly wanted to give the Frenzy/Savage set a try. When I had the fundamental pieces assembled, I felt the set kinda sucked. It just felt super slow and the Frenzy stacks would drop off. I couldn’t tell if the Frenzy stack drop off was a bug or not, but it made moving around sluggish. In the end, I simply returned to the old Rend/Whirlwind build, which still felt sluggish compared to my GoD DH.

The way I have this build working is using Vengeful Wind and Won Khim Lau as my weapons with Balance, Mantle of Channeling and an Obsidian Ring of the Zodiac in my cube. Also, I have Cesar’s Momento for my bracers, Kyoshiro’s Soul, a Unity and the Endless Walk for my other jewelry slots.

Much of the damage comes from Sweeping Wind as it gains all the runes from the 2-set bonus and Vengeful Wind + Kyoshiro’s Soul boost the damage and stacks. Kyoshiro’s Soul is particularly useful as it helps maintain your stacks while out of combat. This is important since movement is increased by your 2-set bonus per sweeping wind stack.

I use an Obsidian Ring of the Zodiac along with a Gogok of Swiftness to help lower my cooldowns, especially for Serenity and Epiphany. Both just help keep me from taking more damage and the running is smooth.

I really like this build so far. Not as much as my DH but once I had the basic gear, it felt smooth and powerful. I did run out of spirit often though so that part can get a little sketchy. While I use Tempest Rush actively to move through my enemies, I employ Dashing Strike to dart through hairy situations and go across longer distances.

Overall, I feel I’ve satisfied my basic D3 seasonal fix. I might try to push the gear on my monk and DH a little more since I haven’t done any augments yet. I think I can easily get up to GR 85 on my DH once I get a few more ancients (especially another ancient Dawn) and some augments.