I decided to bite the bullet today and pick up a few Lego sets at Target. The first one I built was 70705 from the new series Galaxy Squad called “Bug Obliterator.” The set is actually three vehicles where one can be combined from the two Galaxy Squad sections and the other is a wasp-like hover craft of sorts.

I picked this set for the first of group as I felt that the main space craft has a nice color theme that matches closely with the older Mars Mission sets in orange and white. More importantly, without looking into detail at the set, I realized right away that the two vehicles could be united: 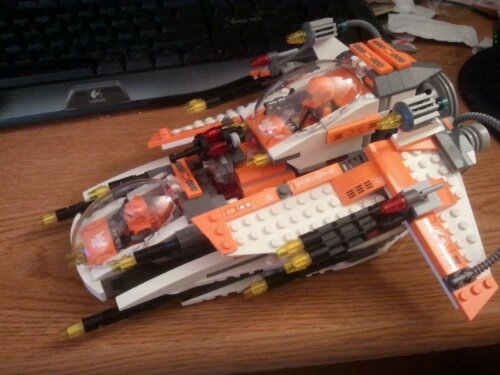 Before we get into this part, I want to discuss the little wasp piece. I’m not really a huge fan of insectoid creations in general. But I can see why Lego often uses them as a sort of nemesis (quite a few games do this like World of Warcraft). I suppose if anything Lego is training future fumigators for your home.

That said, the little wasp piece has a few interesting colors going for it in the Now-n-Later neon green, maroon, dark gray and black. It’s very creepy with the six claw-like legs and frontal pincers. However, the little bug guy manning the ship is the star of the craft, having a menacing head. I can’t find the antennae attached to the helmet piece so it might’ve dropped some place on my floor or desk. The main feature for this piece is the attached cocoon pod sitting behind the rider. I believe you can place abducted space men inside where the troops attempt to save their comrade. Beyond that, there’s little inspiration for this piece, although the rear tail is jointed and looks to have a cannon mounted at the end of the tail. 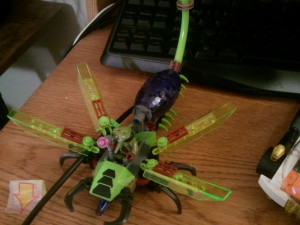 The next aspect you get to build is the ground rover, which serves as a missile turret system. The turret can be elevated and hidden in the rear. The top section is a plasma cannon that you can remove and have the driver hold as a formidable weapon. The interesting part beyond the missile rack is the driver itself. The driver wears a pretty cool looking helmet and might actually be a robot since there is no head beneath the helmet. Underneath is a sweet little armor chest piece with two notches that you attach a pair of wings. Surprisingly, you can fold the wings up and store the driver inside the cockpit. Now, I had a slight amount of trouble fitting him inside as the wings barely provide enough room for the driver and have the possibility of sliding off with the cockpit connector just bulging above. 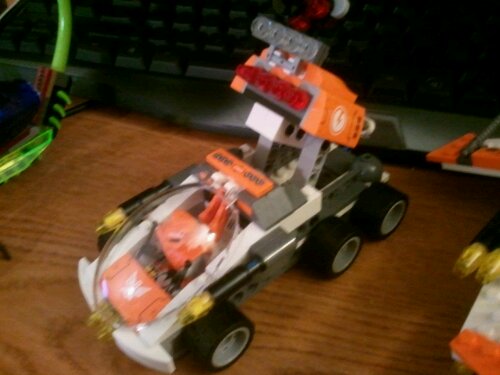 The last section of the set is the main ship. It’s a mid-sized fighter and is split into two packages. Sadly, there’s not as many moving parts as I would have liked. But I think that compromise is made up in terms of the structural integrity of the craft. It’s quite sturdy and solid overall. I think that design was kept in mind since the primary feature of this set is to connect the ground craft to this ship. The ground craft has a little bit of weight so the rear section needs to be able to reliably hold it in place. Considering that only two little joints connect the two crafts together, the design does a great job in preventing the two from splitting off easily.

Like the turret aspect of the ground rover, the space craft can hoist the cockpit up to allow the ground rover to unite. However, besides the side wings being able to swivel slightly, there’s not a whole lot else going for this set. 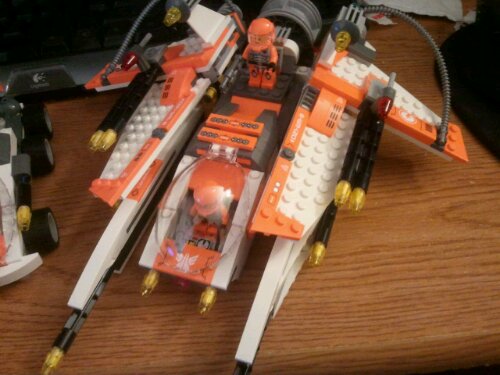 Some of my chief disappointments was the general lack of playability considering the price and number of parts. The space craft has a good look but doesn’t do much. I felt that too much of the set had more details by using stickers to give it character whereas some glaring deficiencies existed. For instance, where do you place the spare astronaut after you “rescue” him? Where do the laser pistols go? There should be at least some storage unit where you could contain those pistols when the astronauts are flying around.

The other thing I’m not overly found of are the oval shaped cockpits. It’s become more standard these days but the shape make it harder to design other types of cockpits. You pretty much are forced into using that slanted design. Also, for a space craft, the shape just does not seem air tight.

Lastly, does Lego really need to add alien bug units just to create a mythical threat? The insectoid craft are quite ugly on average and look like something you would use to scare the neighbor’s cat. I find it hard to use them as parts for a different type of craft because of the make up and mentality behind those sets. For myself, I could’ve easily done without the spare insectoid craft, bring the price down a little and just have a kick-ass looking space craft.

Overall, do I feel that this set is worth the money? The space craft alone for the design is worth the money. It’s a very good looking craft and the rover aspect compliments the feeling well. I can see it fitting into the Mars Mission series stylistically and parts-wise. I probably won’t be picking every thing set in this series since the more bug oriented ones look terrible and their counterpart astronauts do not have any outstanding craft that really make me want to go out and pick them up. But this is a good start to the general space sub branch.