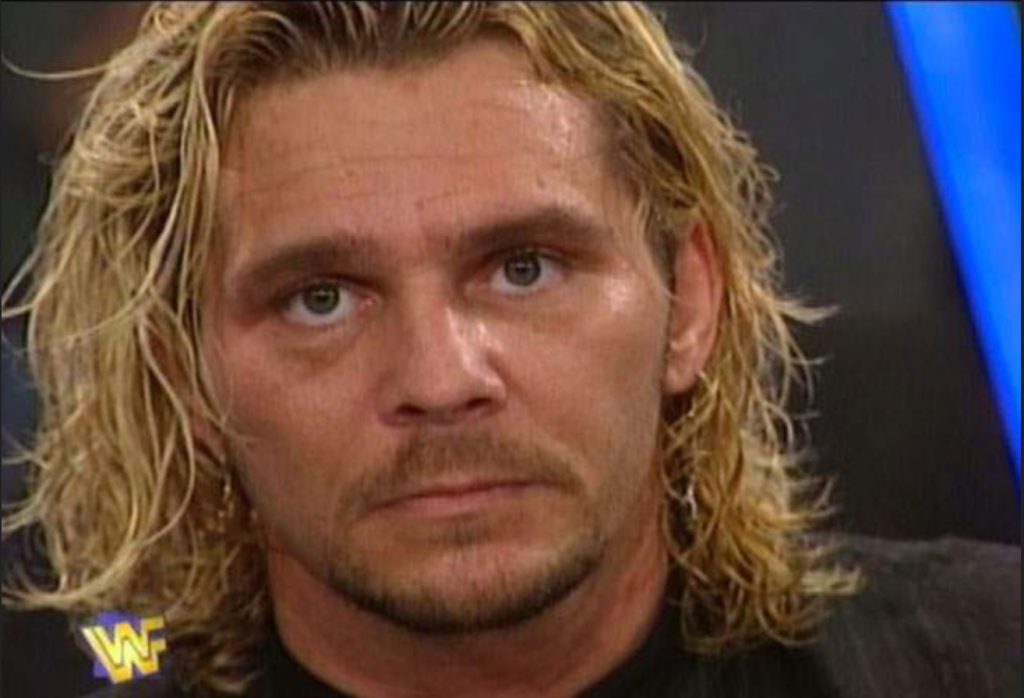 Back around 1990, I started to get back into pro-wrestling after a few years of a hiatus. Part of my return involved seeing the slow merge of the old NWA with WCW. Around that time, there was a large number of new stars I was unfamiliar with along with veterans that I had seen such as Ric Flair, Arn Anderson and the Midnight Express. One of the new stars though was Brian Pillman.

Pillman was tagging with Z-Man and the pair held the US titles around that period, feuding with the Midnight Express and I believe actually beating them. Around that period, they would be associated with Sting and his crew (the Dudes with Attitude) as Sting, Lex Luger, etc. feuded against the Four Horsemen. The big culmination of this feud led to a War Games with Pillman partaking with Sting and Steiner Brothers vs Ric Flair, Arn Anderson, Sid Vicious and Barry Windham. Pillman was ultimately injured at the hands of Sid Vicious but return in bizarre feuds against the likes of Barry Windham (partly as the masked Yellow Dog) and to a lesser degree Dutch Mantell.

One of the key things mentioned during the show was how Brian Pillman was booked through his tenure in WCW, namely that he would receive a plethora of start/stop pushes that never led to something bigger or having him reach the precipice of being a true main event wrestler, despite having the majority of the tools to be able to handle the role. For instance, Brian would have a legendary light heavyweight match against Jushin Thunder Liger, which received a great deal of accolades that elevated Pillman as really cementing his overall ability while giving more casual fans a glimpse of the Japanese smaller style wrestler. Despite the rumble, the title nor Pillman wouldn’t get much of an opportunity to do anything with the result of the match.

The interesting intersection that wasn’t as apparent to the casual wrestling fan at the time (i.e. people like myself) where the show catches my attention is his behind-the-scenes life drama with his wife and children. He does go through numerous girlfriends, including Marlena/Terri Runnels at one point, but settles on one that became his wife.

However, trouble brewed with his second wife, which, I found out, was someone the Ultimate Warrior had an intimate relationship at one time with (can’t remember if she was an ex-wife). The description of Melanie in the show was a “show girl” in Atlanta. That sounds almost like a polite way of calling someone a stripper given the nature of the business and the fact of how things would turn out. The trouble namely was that he would ditch his first wife Rochelle and abscond with Melanie as well as gaining custody of their children which ultimately would lead to Rochelle committing suicide with a pistol.

Without the internet, the situation was kept pretty hush hush and I never realized any of this until only with this show. However, for Pillman, it seems that his private life was plaguing him as he had a large number of children, including a daughter from another woman prior to Rochelle.

The show does attempt to paint Pillman as a good father regardless in that he does care for his children. So that looked to be the impetus of where a lot of pressure was building along with the probable guilt of the fate of his ex-wife. What happens is the slow development of a persona hinted here and there from his growing vocabulary, the taunting asshole personality seen in the Hollywood Blondes and the need to make a mark to get the money he felt he deserved.

Thus, the Loose Cannon was born.

Of course, not long after during his stint in ECW, Pillman bought a Hummer and crashed it, which would be the beginning of the end of his career. His ankle had been crushed but it was bad enough that it affected his performance. When he appeared in the WWF at the time, he was far from 100% and it was shocking to see him on crotches. Here, we had a renown high flyer reduced to a limping shadow of himself.

However, Brian continued to doggedly become this new character, antagonizing the fans and the people around him into believing what he was doing in creating a type of character no one had seen up until now. On the other hand, drugs started to get in the way as he became dependent upon painkillers to numb the surgery that he was unwilling to give himself to recuperate from.

Thus, it was a complete horrific shock to the wrestling world when they announced his death. Someone who seemed like to be on the verge of greatness was taken away from the fans. The aftermath was far from over though as the WWF tried to take advantage of the situation with using Melanie to bolster up ratings during a crucial period where WCW was killing them weekly.

The other thing is that the WWF would send Melanie money for her husband as the years passed. Yet the children said that not a dime was seen by them. Their youth was spent with a drug addicted, alcoholic mother that nearly died from alcohol poisoning, eventually re-marrying to an abusive new father.

Probably, one of the most heartfelt moments was Brian Pillman Jr revealing his own trauma growing up to an abusive step-father. The parts with Brian Jr talking about not having a real father to play ball with, not having actual athleticism, staying inside his room to hide from a terrorizing dog while playing games that his step father would destroy, all were very hard to view.

However, the light of hope in their family remained their aunt, Brian Pillman’s sister. Through all of this, she has remained the true angel to this family in trying to provide a roof over their heads and maintaining a semblance of an actual family. With Melanie, Brian Pillman Jr is attempting to rebuild his relationship with her while he makes an effort to secure his own legacy as he honors his father’s.

The thing for me that first stands out in this two part series is Brian Pillman’s somewhat alpha-male persona that probably got him into trouble. Pillman certainly was blessed with good looks and natural talent but if he had one weakness it’s that of allowing his penis to do the thinking where his brain should have. While I cannot blame the desire as a male myself, I can blame his weakness and inability to control himself that started the ball rolling towards his demise.

Another aspect of this documentary is the coach figure. He was pretty wild but seemed to act more like a life mentor. I think the one thing was preventing Brian from going overboard with the women and possible excess. Everything else looked to be on point with how he guided Brian, although I think Brian probably should have left WCW a lot sooner.

Then there was the Melanie melodrama. It’s really hard to believe that the woman in the photos and wedding video was the same person as the woman being interviewed. But they say that drug addiction can really destroy a person. I think in her case, she was simply too depressed when Brian had passed and that she did not know how to cope. What she did with Rochelle and the children probably had plagued her and it looked as though she wanted to try and kill herself at some point.

The other thing was that I was amazed that they managed to get Melanie at all and that she was willing to speak on the subject matter. I think as a spectator it will always be impossible to discern on a professionally produced documentary like this whether or not a subject like Melanie was being sincere. The daughter Brittany was quite condemning of Melanie, calling her evil and “showing her true colors” after Brian had passed in how she took all of the legacy money for her own. There was an email/note circulating a while back from Brittany that unveiled the conditions of which the children had lived under, being penniless while Melanie used the money to fuel her drug addiction.

Seeing Melanie here (if indeed that was her) to me shows what guilt might look like physically. I think the drugs was used partly to numb the pain but that made her even more out of control and do things to make her seem even more inhuman. I’m not trying to give the woman an easy out in all of this, but I have to at least put myself in her shoes to figure out how she was feeling at that time to make her perform actions like that.

Now, the person I’m keen on at this moment is Brian Pillman Jr. At least from what I’ve seen, he seems like a good kid with a lot of people looking after him. He’s got history as an ally with tales of an unfortunate father to use as a precautionary tale. For myself, learning that he’s a gamer too and I believe someone who even took computer science as a major up in college, I really have respect for this guy. If anything should the wrestling fail, he has a backup plan. As one professional engineer to another, I would love to work with a guy like this just to see how that side of his brain works.

All I can say is that as someone who has lost his own father, I can identify with the feeling. If you need a father-type of figure in your life, Brian, feel free to reach me. I have no kids of my own, and though I might not be able to play ball with you because of my own lack of athletic ability, I’d be more than happy to be a mentor on life if you ever need one, buddy. All the best for you and I hope you do well for your career.