Since I have not done a Lego review in a long time and that I just picked up the 60271 Main Square set and built it this morning, I figured it would be good to write up my thoughts on what looks like a grand set that in reality is somewhat controversial from my viewpoint as a hardcore collector of Town. 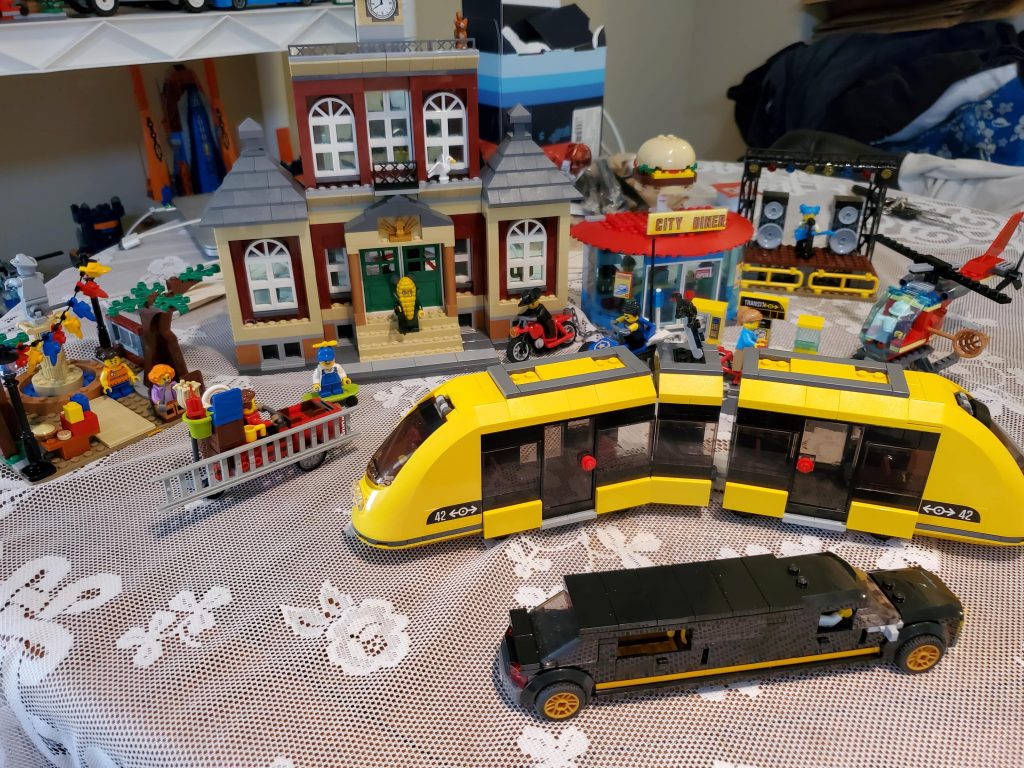 The street sweeper vehicle goes along with a police ATV and classic outlaw cowboy styled robber on a getaway motorcycle. From the looks of it, the driver might be a Western saloon type of character as well, given that he has a utility type of belt you add from the pants level. This part seems like it could be a part of a show or repair gimmick as the sweeper has a ladder, toilet seat, chain and dynamite minus a clown. It’s really an odd little item because it almost resembles an amusement park type of fire vehicle due to the ladder and color.

Now, the cowboy robber and police ATV part seem more like random additions to this set, although I think they only exist so that Lego can continue adding fire and police related themes into the city just to provide an element of playability for a kid who otherwise would see such a system as boring and drab. 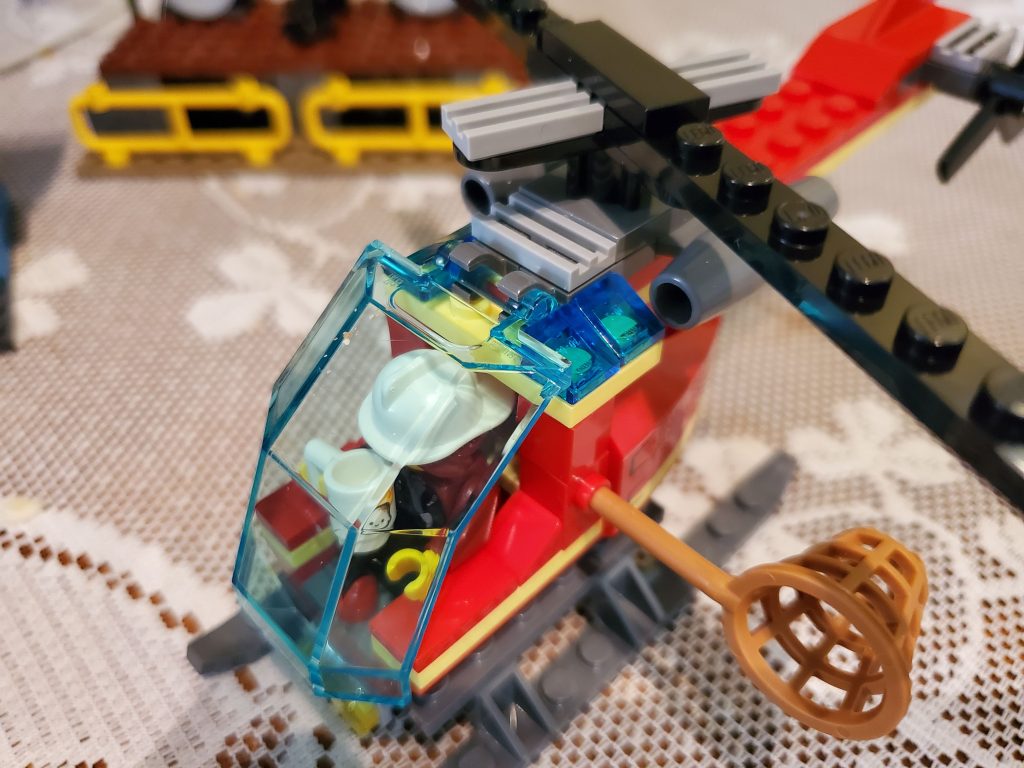 Likewise, the set has a bizarro fire helicopter with a basket attached to the side. Now, I label this part strange because it feels really out of place in a set that’s supposed to be a city center type of piece. I assume the main reason this part of the set exist with the basket is to rescue the cat hanging on the roof of the town hall. But again, with so many fire helicopters and similar sets, this part feels absolutely irrelevant beyond Lego attempting to heighten the value to a child’s eyes.

Another part of the set that I did not photograph up close was the limousine. This is one of the two limousines that exist in Lego history that I can recall. I believe it might actually be for the mayor of this town. It’s an interesting part just because the mayor is an interesting figure (more on him later) 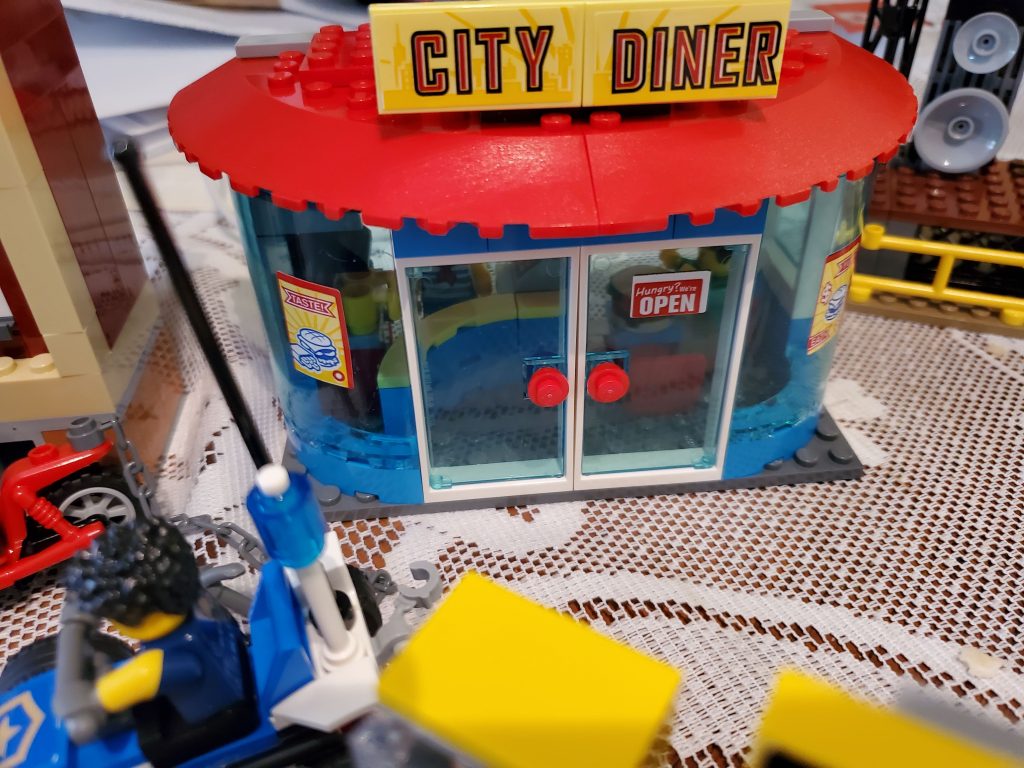 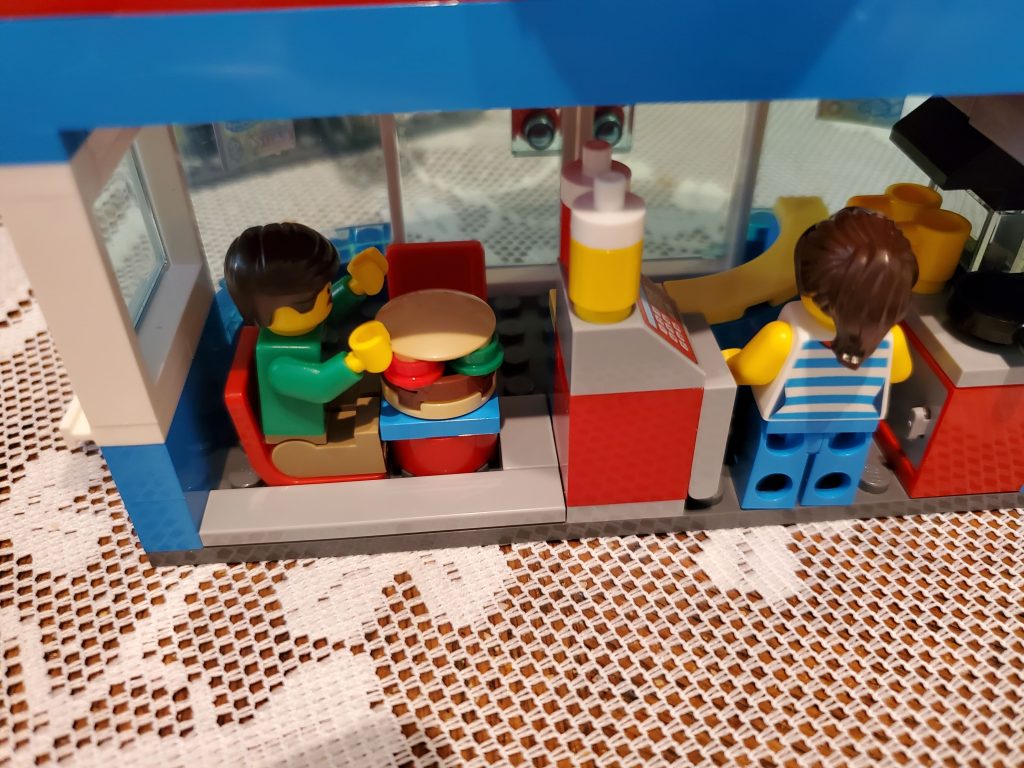 Next, we have the City Diner piece. This is where the Main Square label begins to feel like an actual town piece worthy of the title. While this piece is small, it does add a feeling of a classic Mel’s Diner type of restaurant. The three stickers included are nice callbacks to earlier years while we see a tiny kitchen, cash register and a giant burger for a dad figure to consume. It’s not fancy but well done and a nice addition for your town in terms of places to eat. 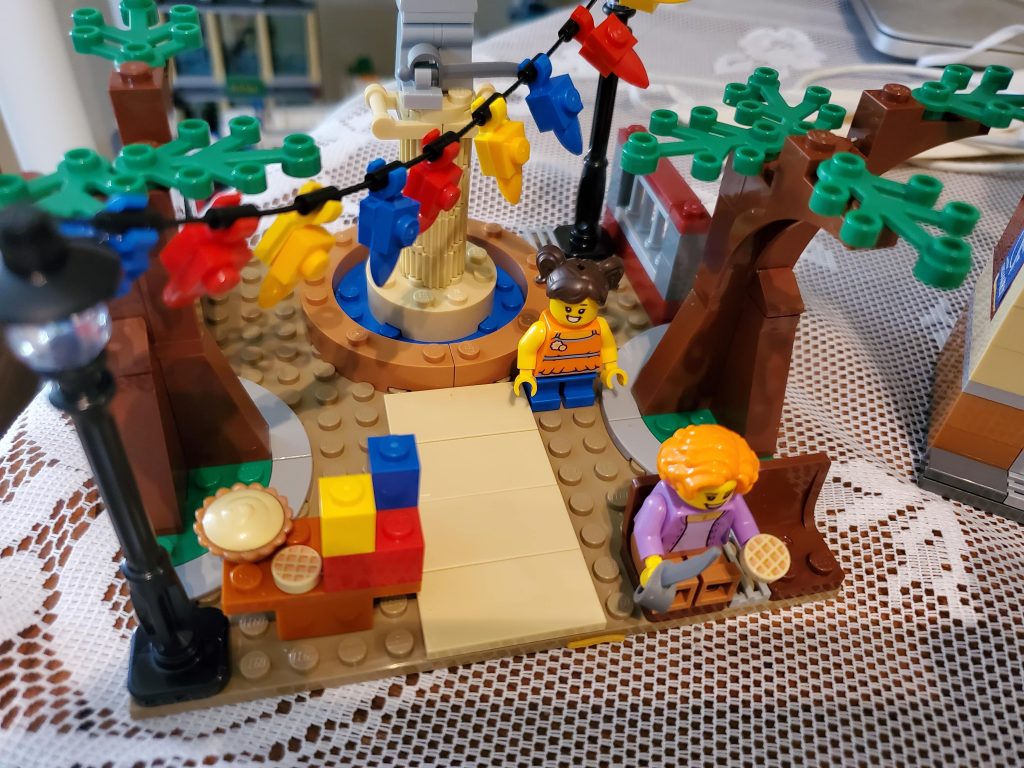 The park playground area is probably the literal Main Square aspect of this set. The tiny gray pirate-like prisoner statue in the middle symbolizes an odd representation of the possible origins of how this town came to be. But there’s small elements here such as the pond, the colorful lighting ornaments, bench full of pies and desserts and small family relaxing outdoors which gives the set a truly unique atmosphere. I think a component like this mixes very well with, for instance, the latest skater park in that they easily could be placed adjacent to one another to create a larger central park. 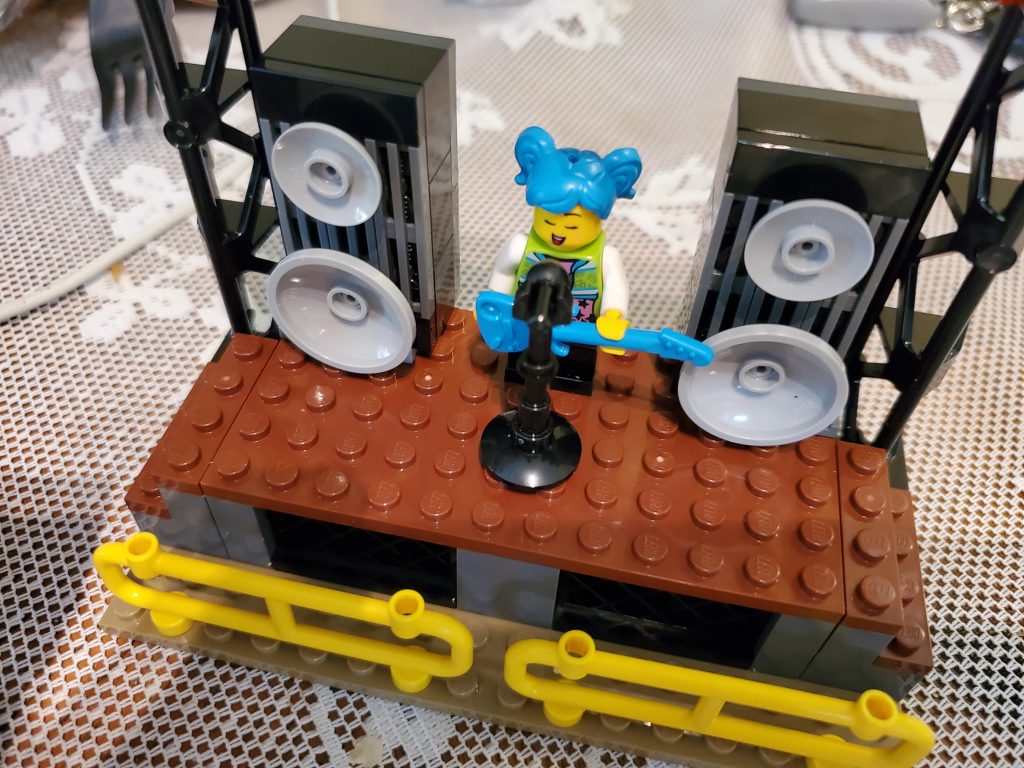 The concert stage portion is probably my favorite aspect of the Main Square set. Simply put, there is no other set like this and provides a vastly unique experience in the realm of City Lego in effectively providing the first concert platform ever that I can remember. The loud speakers/amplifiers, microphone, stage lighting and hipster Disney blue haired auto tuned vocalist (I mean where are the rest of the band?) is a very interesting departure from the now (what I consider) boring fire, police, gas, etc. repeating parts of town and introduces something I’m shocked up until this point never has been a thing ever in the history of Lego. 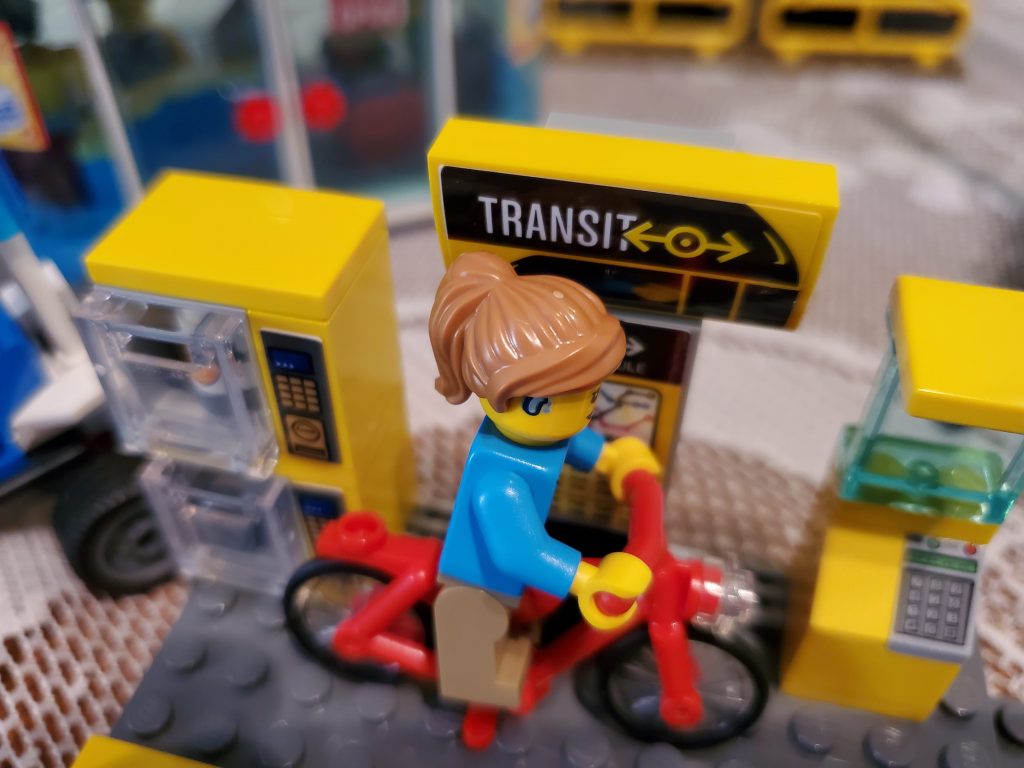 The tram stop portion is a small section. It’s similar to some of the bus stops of other sets and includes a bicyclist and some vending machines serving ice cold drinks. A small map and machine for buying tickets are also available here. 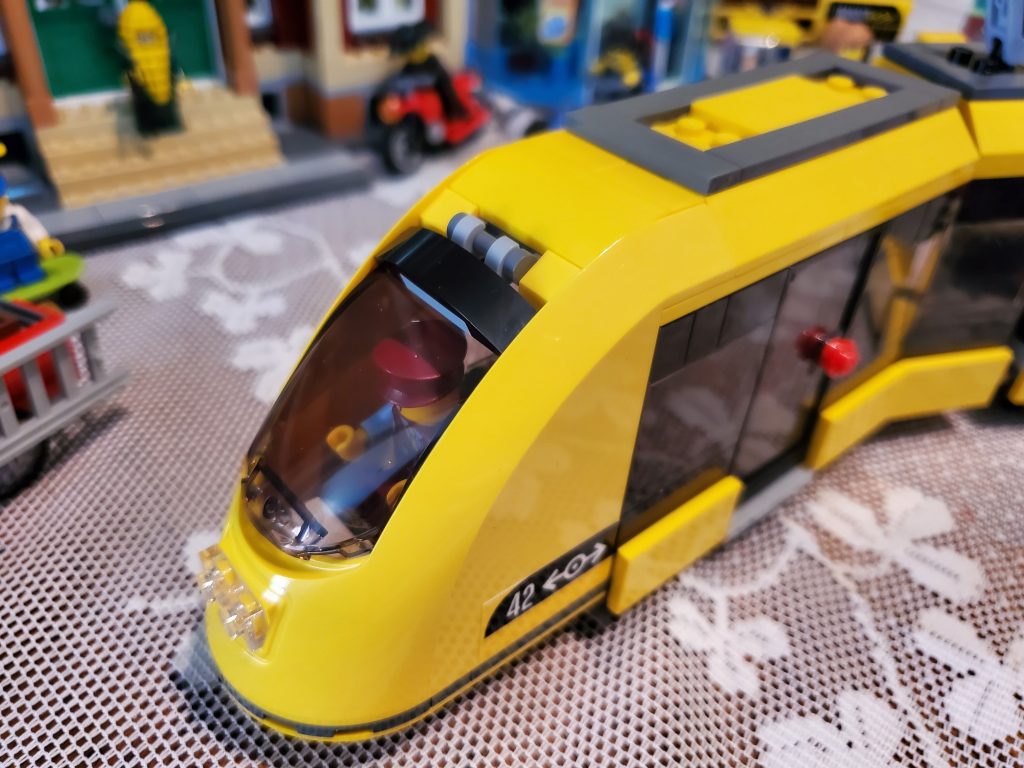 I think in many people’s minds who might view this set, the yellow tram might be the highlight of this set (not for me as I prefer the unique concert stage). It’s pretty small but interesting because it adds another public transportation utility that allows one to place the bicyclist inside along with her bike. Nothing incredibly fancy here but another good flavor for this set. 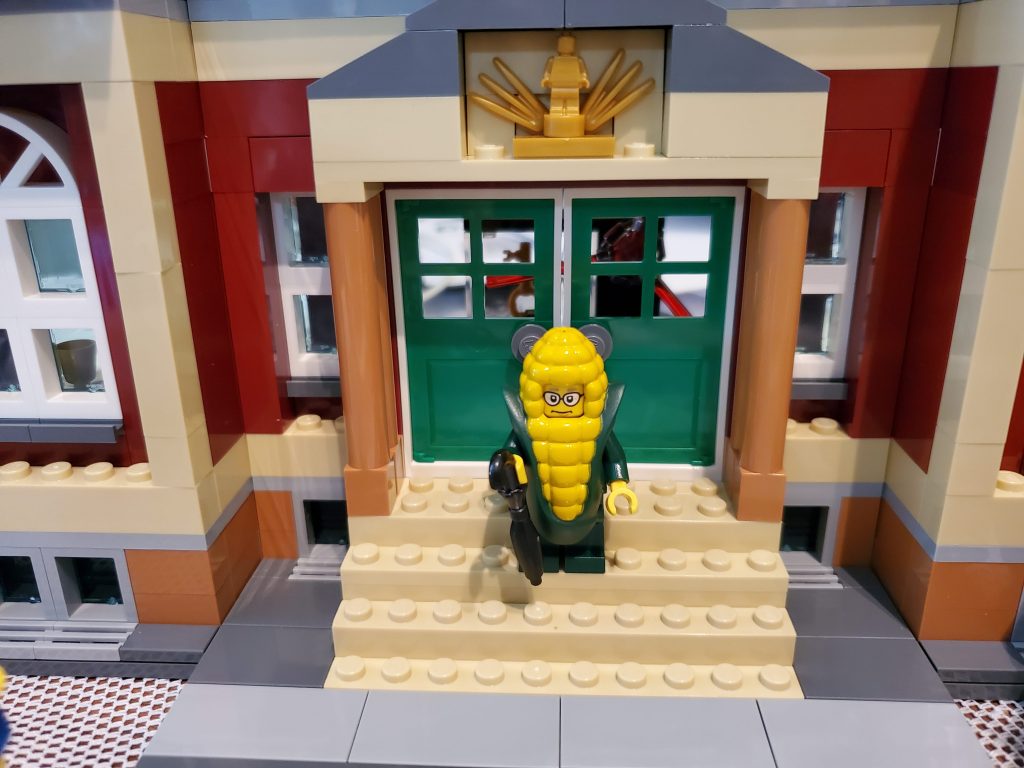 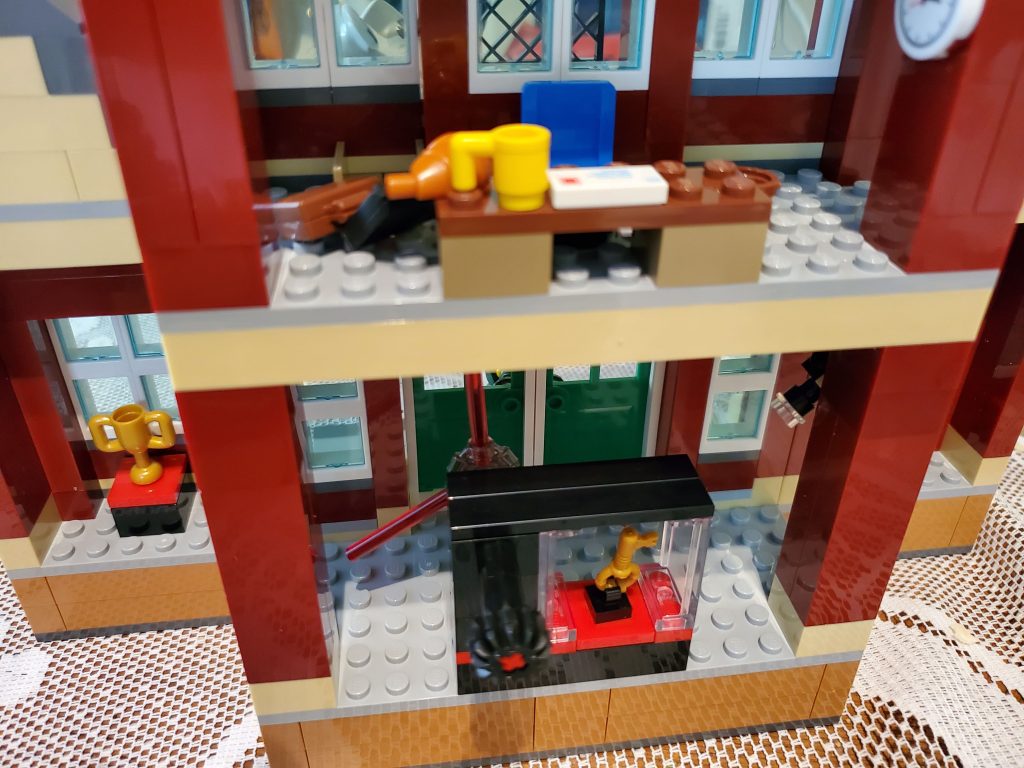 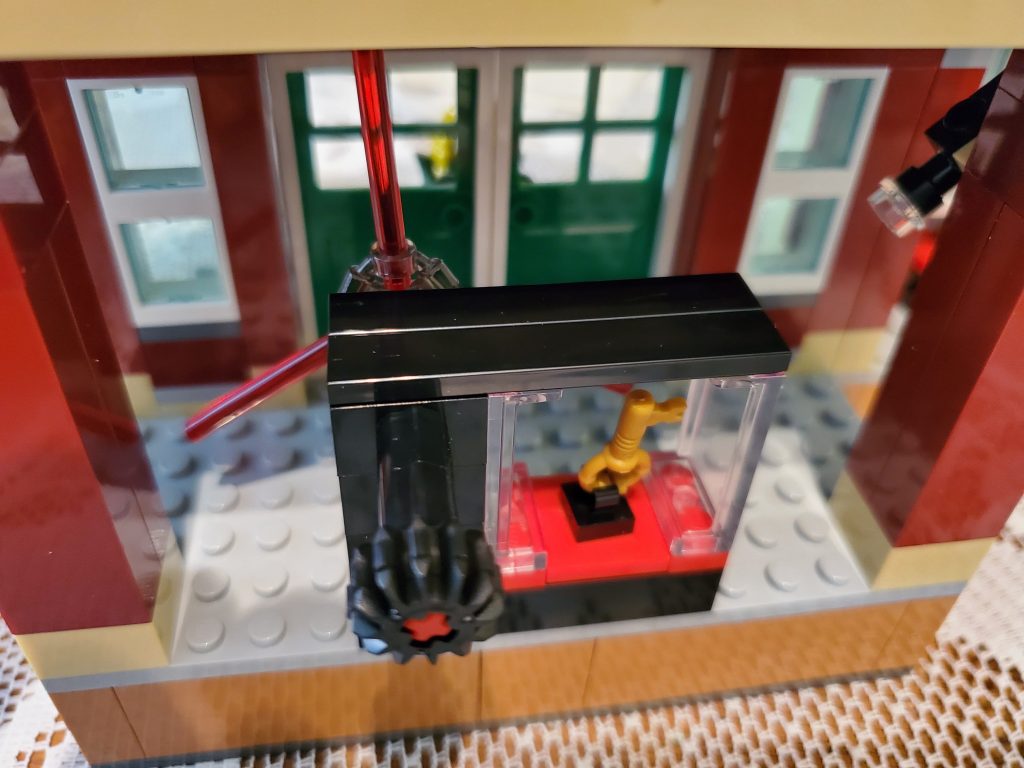 The last major part of this set is the Town Hall. Or is it a museum? I really cannot tell because this is a really bizarre building. On the one hand, there are three treasure trophies on display, namely a key and two cups in a pair of modular side rooms. The key (presumably the proverbial key to the city) is enclosed in a glass case with what appears to be a laser barrier and a small security camera watching from above.

The mayor himself is a very odd character. When I first took a glance at him, I thought he was Serpentor because the costume he wears from a distance makes him look more like a cobra rather than a corn on the cob. Up close though, you see that he’s a regular nerd dress as a corn. I really just don’t understand why. My guess is that this Main Square is more like a Disney-ish type of town square with colorful characters, rodeo elements, etc. Nonetheless, it’s just bizarre seeing a mayor dressed up randomly like a corn on the cob. Heck, this set does not show anything remotely corn related so his appearance looks more like Lego attempting to re-utilize specialized parts where they can.

The second floor is an office for the mayor with a very sad amount of detail considering how the other aspects of this set were outfitted with decent detail. The only remarkable things are a laptop, briefcase, an umbrella holder and the mayor’s desk.

Above the mayor’s office is a small clock tower with a door. There’s a small cat that lurks above while a pigeon can harass potential bystanders near the edge. The box demonstrates that the repair man attempting to clean out the tower while the aforementioned pigeon probably has lain a few well placed (and possibly deserved) droppings as the lady pilot from the friendly fire chopper mysteriously drinks her cup of coffee while furtively slinking from the oddly placed door to the clock.

This set is really a strange mixture of ideas that are compiled into the label of Main Square. However, it really feels like several orthogonal sets that were randomly pulled together rather than sold separately so that Lego can force sucker collectors like yours truly to pay the overbearing fee of an unexaggerated $200. And thus begins the real critique of this review.

There is no logical reason a set like this should exist beyond Lego’s corporate greed of trying to get hardcore collectors of town into investing a good chunk of change for what could have been separately sold sets. You easily could have made 6 or 7 sets from this one set just based on the incoherent assemblage of ideas that create a pastiche that really does not describe accurately what a Main Square ought to be.

I know that I am not the only dissatisfied customer when it comes to this set. And really it has nothing to do with components themselves as they individually embody aspects of a town that I love. It’s the way this has been implemented and sold as a package. The park, for instance, is reminiscent of an older version of Lego’s attempt to sell figures in bulk; except rather than a $5-10 set, they now upcharge $50 or so with random bits and pieces that go beyond minifigures just to boost the price with packaging and polybag glut.

I feel that the police ATV and fire chopper as well as the fire truck-like utility vehicle are hints of Lego’s lack of confidence in being able to market sets like this to children because now they have put themselves into the position that any non-female set for town must incorporate some play action type of theme. So a set like this receives unnecessary elements of fire and police for no other reason than this problematic marketing viewpoint.

Another thing that saddens me about this type of product is the now absence of street plates. Without street plates, each section of this set makes it feel more disparate and having less motivation to be sold whole compared to separately. In the past, a similar set like 6390 Main Street would have two large base plates being sold with it, giving the set a far more coherent structure as well as making the size of the box justifiably larger. Here, the box becomes a cumbersome marketing ploy that more than likely boost the price far more than what it should be.

Now, I will admit that I felt a little desperate in buying this set, knowing that given the situation, such a set would never go on sale at the price it should be set at (which in my estimation should be $100 max). There are some really solid elements that make a set like this distinct from so many other past sets, which should be a must have for any hardcore town collector. The tragedy in a set like this is the mixed message of how Lego must package up their sets these days in justifying ridiculous price points when they aren’t trying to cater to Star Wars or Marvel franchise fans.