Clan Games started the other night but I pretty much have been slightly behind due to work. But right now I’m doing a huge catch up and managed to score the Tier II rewards. That said, this season’s Clan Games rewards seem a little dull with no extra Rune. 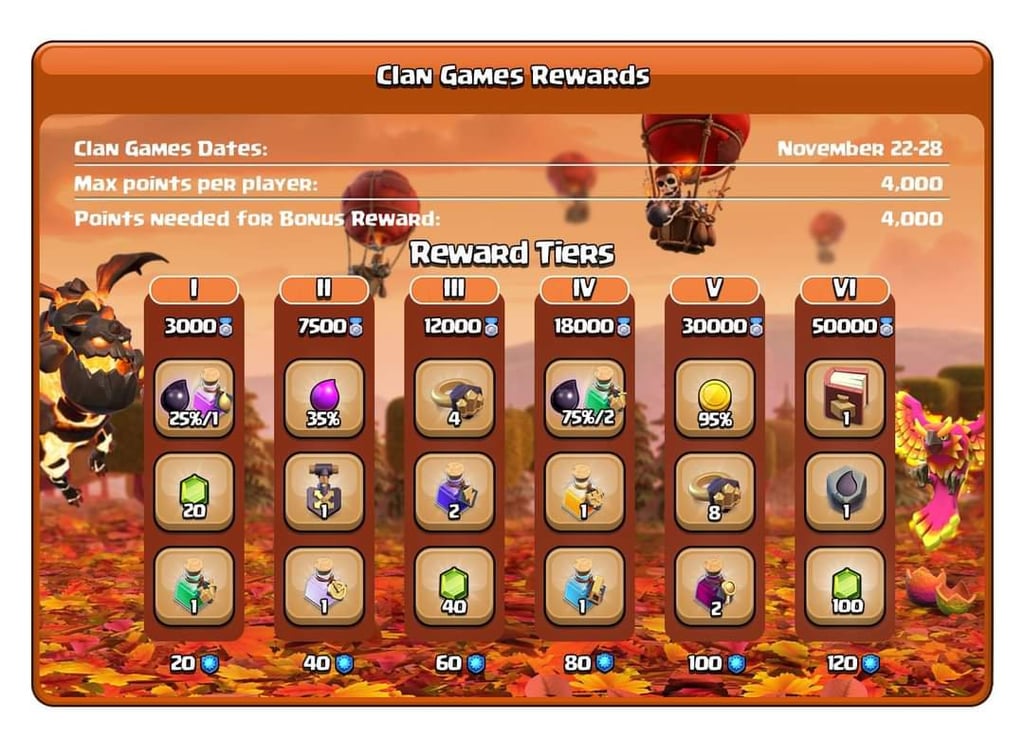 Because of work, I haven’t been posting as much and pretty much relegating most of my major playing time either at night or during the weekends. I missed out on this past weekend’s Raid Weekend just because I was feeling burnt out and tired. But I should get back into it this coming weekend as I have not only unlocked Balloon Lagoon but the Jump Spell Factory and another Army Camp. Right now, I’ve been trying to upgrade that Army Camp so I can have another +5 troops. Afterwards, I’ll probably put all my efforts into unlocking another Spell storage spot.

Going back to Clan Games, I’m slotted for some big points tonight if I can really push with some of the longer but more rewarding challenges. I’d like to get as close as possible to unlocking Tier III rewards so that I can at least come out of this season with 110 gems. But the Tier IV and V rewards have a Builder Potion and 2 Research Potions, which I really need. Then if I can squeeze in the 4k points per account, I’ll pick up either Gold or Wall Rings as my bonus choice. I still have until the 28th to get all these things done but I want to push as much as possible since Tier V is pretty rough.

Progress-wise, I’ve been trying to finish up with my TH13 main account. It’s pretty much down to Archer Towers, Cannons and Traps in terms of upgrades. There’s some spells and Dark Elixir troops as well as the perpetual Wall menace but I can’t see this account going beyond another month at TH13. I just started upgrading my Valkyries which will be huge since those have been under leveled for a while and I have been using them a lot as part of my Clan Castle troops. But once those are done, I’m going to be focused on pushing my Archer Queen to level 75 next month. That one will be quite painful as my Heroes are all competing for Dark Elixir. If that’s the case, why upgrade Valkyries? Pretty much it was a now or never deal.

My 2nd TH13 is slowly grinding away in upgrading the core. Quite a few of the defenses there have been upgraded to a satisfying degree like my Inferno Towers and Scattershots. But I’m finishing up things like the X-Bows and Air Defenses. Once those are complete, I’m going to switch to the Wizard Towers and Seeking Air Mines and just keep going for a while. At the same time, I’m trying to get my Grand Warden to level 45. Once he’s done, I’m going to switch back to my Barbarian King and get him to level 60.

On my TH11s, I’ve been really pushing my main one. I got my Grand Warden to level 15, which isn’t bad but I think it was time to push my Archer Queen to level 35. Since I use Ice Golems + Witches as my primary attack, I actually enjoy using my Barbarian King so I’ll probably level him in parallel to my Archer Queen at least in doing +5 level upgrades at a time. Nonetheless, a good chunk of my Wizard Towers have been upgraded so soon I will be able to swap to Bomber Towers, which have +2 upgrade levels at TH11, as well as slowly getting my 5th Wizard Tower upgraded.

My 2nd TH11 just got the Grand Warden to level 10 which will allow me some breathing room to focus on another Hero. I might just try to do things like give my Archer Queen +1 level and circulate a little more rather than just push one Hero for 5 levels straight. It’s just that the Grand Warden is so critical at this point in time and easy to upgrade that I felt it was better prioritizing him early on, especially with a plethora of Elixir at my disposal. Both now all three TH11s have their resource storage units fully upgraded for that level, which means I can spend my Gold and Elixir for defenses and troops.

For my TH10s, I’ve been restraining myself from rushing them unlike my other TH11s. So my top TH10 has been upgrading traps and Archer Towers with the bulk of the “good” defenses now upgraded for that level. Also, I want to get my Archer Queen and Barbarian King up to level 30 at least before heading into TH11 this time around. I really don’t feel like rushing into TH11 as I’m missing things like a Book of Spells here and there. And with TH11, I like having at least 1 Book of Building, a Book of Fighting and a Book of Spells lined up so that I can get my Lightning Spells leveled up immediately with a Lab, upgrade the Barracks and upgrade Electro Dragons to level 2. By doing that and plopping down the Grand Warden as the first thing to be built, you pretty much can cruise early on as a TH11 until you can upgrade your Clan Castle (not as critical), your Dark Barracks for Ice Golems and your Witches while you grind for a few days.

Another thing that I’m starting to get tempted at is creating two more accounts. I know that December, I believe, has a special Clan Games event where you have another Tier of rewards. So with 10 accounts, you should be able to hit the maximum Tier level. But that does mean I’ll have to setup two more email addresses and just futz around the whole process again. That includes the Builder Base side of things which is horribly painful to me. But it does mean I’ll have two more accounts for my Clan Capital. Quite frankly, I’d prefer to recruit people to help me. But the temptation is there.