Clan Games started two nights ago but so far, I’m almost at Tier III rewards. Unlike last season, this season is more of a traditional Clan Games with regards to the rewards system, only reaching Tier VI total with 4k points per account. With that in mind, I’m aiming for Tier V rewards and trying to max out the points each of my accounts can earn to get the bonus. 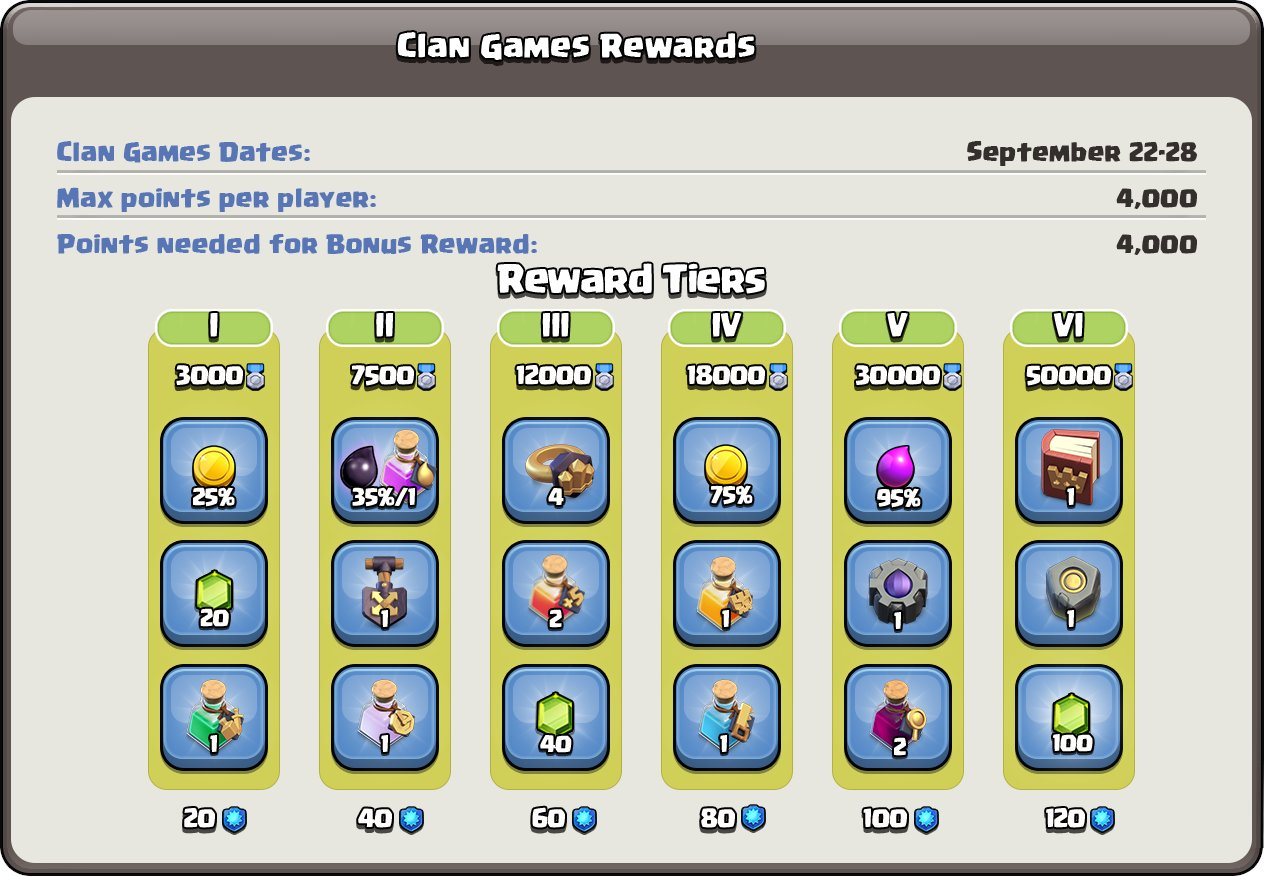 The Tier VI reward itself has a Book of Heroes but at this stage, only my main accounts can really make use of that item so I don’t see this situation being that bad. As you can see in the image, the Tier V rewards have a few good pieces like 2 Research Potions and the Rune of Builder Elixir. Now, those items I can use for my lesser accounts so that will make the Tier V worth it.

One thing I can say is that I’m starting to find Gold becoming scarcer. More rewards from PVP battles have less and less Gold compared to Elixir. So Tier IV’s Gold vs Builder Potion rewards might feel a bit difficult. Or perhaps, the choice might be the Rune of Builder Elixir vs Gold. I feel that the Gold might be more precious because most of my accounts don’t have much Builder Elixir storage space. On the other hand, the one guarantee to me is getting at least 110 Gems from this from the first three rewards (you can sell the Shovel for 50 gems)

I suppose I should start my Raid Weekend for Clan Capital because some of my accounts are starting to really utilize the Raid Medals. I managed to upgrade my Cannon Carts to level 10 in large part using Raid Medals. And while I’m at level 5 Builder Hall, I might try to use those Raid Medals to continue upgrading my Battle Machine. Since I’m finding success with this method, I’m trying to rush my other accounts to get to this level so I can start purchasing Builder Elixir and rapidly upgrade my Cannon Carts all around.

In addition, many of my accounts have managed to reach the final rewards for the season pass, which makes me happy. I still need to max out the Season Bank but I might not be able to this season just because I haven’t been as aggressive and only have a week left for this season. That said, I’m going to try my best to get these accounts maxed out (except for Dark Elixir just because that’s been a lot harder to obtain at this stage).

One nice accomplishment for my TH10s is that all have upgraded both the Archer Queen and Barbarian King to at least level 20. For my 3rd account, I’m working on getting the Archer Queen to level 25. I think she’s at level 24 now so I might drop a Rune of Dark Elixir or just wait for another daily’s Star rewards to obtain the remaining Dark Elixir. Then I’ll progress my Barbarian King in the same manner. Since these TH10s have so many things to upgrade, I don’t have any immediate plans to rush much further just yet. TH11 is tempting just because I’ll get Electro Dragons and the Grand Warden, which means I’ll be in a nice position to be less dependent on my Heroes for attacks. Also, at TH11 I would get Ice Golems but I think Electro Dragons are just far more effective, especially since I can use a Stone Slammer.

My lower accounts are all TH9. I’m finishing up some Army Camps to get ready for Golems and Witches. Also, I’m pushing my Archer Queen there to level 10, which should be enough to swap over army compositions. The only other ingredient at that point is a level 2 Jump spell. From there, I can start attacking other TH9s with confidence. My higher level TH9 just got the Archer Queen to level 15 and is working on the Barbarian King to move in that direction. Again, this leveling process underscores the need to get Raid Medals for quick Dark Elixir since these early levels for heroes are pretty cheap while the Dark Elixir you can obtain through the trainer generally is sufficient to get at least one level.

But the big news is that I decided to upgrade my TH12 to TH13. I have debated whether to use my Book of Building since I have a week to go for upgrades and a spare Book of Building that I’ve been saving. For now, the only thing worth using the Book of Building on will eventually be the Lab. However, on that account, I’m still in the process of upgrading something else so I won’t be able to upgrade it even when I’m ready. So I’m just going to wait a little longer. That said, I’ve been hoarding Raid Medals and probably can just dump most of them into Research Potions to finish up that upgrade. Ultimately, the only other thing I need once I hit TH13 is the Royal Champion.

With my TH13, I’m in a very good spot. I’m starting to finish off all the Air Seeking Bombs since I won’t ever have to worry about them once I get them to level 4. Also, my Bomb Towers are all done for now. So I’ve switched my focus to upgrading Teslas. At TH13, you need to go through two painful upgrades to max them out at this level. So rather than working on Mortars, I’m trying to just get these Teslas complete. After that, I’ll split my Builders between Traps and Mortars and possibly finish up a bunch of lower level Cannons. But I still think I’m at least 2-3 months away before I’m ready to hit TH14.

Speaking of Town Hall upgrades, there’s been more rumblings about TH15 coming possibly in October. I really hope to not see that come out for a while. It’s bad enough just grinding to TH14. But I expect everything under TH14 to drop down in cost and time. I just don’t want to see more hero levels.

Probably, tomorrow I’ll spend part of the day grinding through my Raid Weekend. But this time I have a good reason to do these, although last week I used my Raid Weekend to get some easy season challenges done. This time, my motivation is to get more Raid Medals. One nice thing about the last Raid Weekend was that I got over 400 Raid Medals per account. So that was really cool. I spent most of the time upgrading my Army Camps, Barracks and have been working on unlocking more defenses in the main capital and Barbarian District. Eventually, I’ll start upgrading my Minions but I have no plans to use them just yet. Instead, most of my focus will be on unlocking more stuff per district.

Overall good progress. Can’t wait for the weekend to finish up to claim the Raid Medals and next week to claim the Clan Games rewards. Should see some very nice upgrades soon.