Clash of Clans: Another Season of Clan Games Coming Tonight

In a few hours, we’ll be seeing the return of Clan Games. The rewards were slightly revamped with an extra tier along with increasing the overall bonus points each Clan member can earn from 4k to 5k total. What this means is that at Tier VII rewards, you will require at least 15 people in a Clan while at Tier VI rewards, you will require at least 10 people. 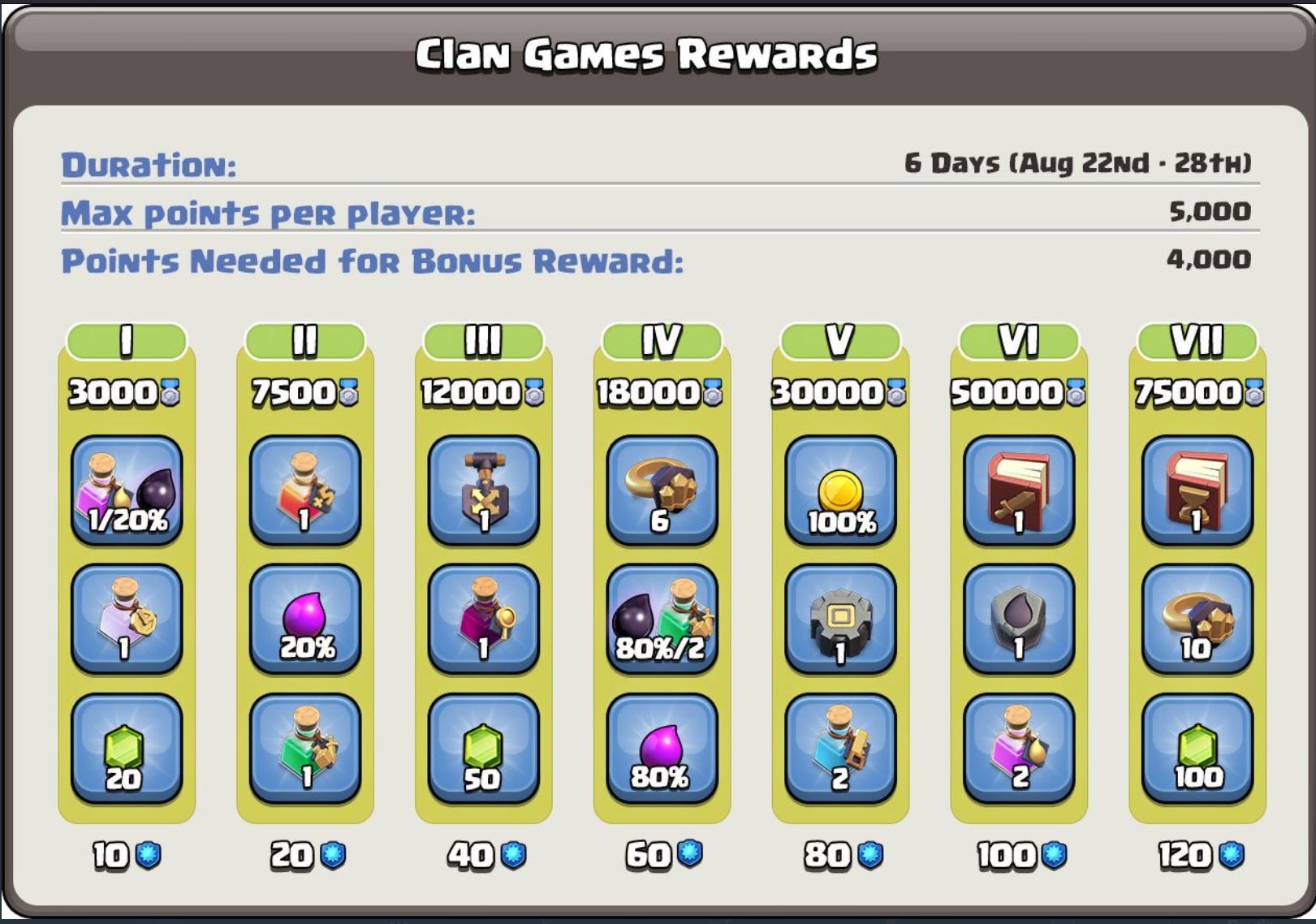 So before talking about the upcoming Clan Games, my initial comment is that I’m a little pissed at this new reward structure. I don’t know if this is permanent but people over at Reddit have mentioned that this might be a special event due to the celebration of Clash of Clan’s anniversary. But it does upset me that I’m just two members behind the minimum to score up the Tier 6 rewards. The Book of Fighting alone to me would be invaluable.

At any rate, I am happy that at the very least I should be able to secure the Tier 5 rewards if I’m able to go all out with my accounts. For my two lower level accounts, that will be a godsend just because of the amount of gems I should be able to obtain. Just eyeing the Tier 3 rewards, with a full bonus choice at the end of Clan Games, you can obtain 100 gems from selling off the shovel and choosing the 50 gems reward. In turn, that should help a lot in my quest to obtain the 5th Builder for those two accounts.

The Tier 5 rewards might seem a little tricky. I think the Rune of Builder Gold might be tempting for those jammed in upgrading their Builder Halls but at lower levels, it’s pretty worthless in my opinion. Instead, the two Builder potions are what I’ll probably go after across my accounts. The Tier 4 rewards more than likely will be Dark Elixir for my lower level accounts and the Wall Rings for my TH12 and TH13. Tier 2 rewards are pretty meh and more than likely I’ll go for the Elixir. And Tier 1 will most likely just be the gems.

Now, the main difficulty right now is that I’m trying to push my Heroes in the middle of all this. My main TH9 account put down both Heroes for level 16 and require another day or so to complete. While that’s going on I’m also trying to progress my various spells. But the good news for that account is that all the resource storage units are upgraded and I probably should be able to hit TH10 soon enough. My last major piece of business besides getting the two Heroes to level 20 are upgrading the Dark Barracks one more time. I suspect by next weekend I should be close to upgrading that base to TH10, which means the other two TH9s are not that far off.

My two TH7s are also getting close to where I want to move them into TH8. I’m only hesitating at this stage because I lack the 5th Builder on both accounts. But once I secure the 5th Builder, I probably will progress those accounts much faster. I think with Raid Medals coming in, it’ll be a lot easier to upgrade my Heroes and dark troops. On one account, I’ve managed to start upgrading the Barbarian King to level 5, which is one of the last steps before moving onto TH8 while my final account is still gathering Dark Elixir. So I think that account will take another day or so before moving forward.

Also, my main account seems to be in a very good position with regards to the Grand Warden. I’ve got two Books of Heroes ready to fast track him to level 50. Maybe once I get my Raid Medals and finish up Clan Games, I’ll have enough for level 50. But that means I’ll be done with him until TH14 and can put all my Books of Heroes on my other three. In addition, a few of my accounts are starting to finish up the season. My main account got the Royal Champion skin and is employing it. So that made me happy.

That all said, the seeds in my mind have been planted with regards to creating two more accounts. The real question is whether or not this new tier system for Clan Games will become a permanent thing. I think if it does, then I’ll submit myself to creating two more accounts. Partly because I’ll get 12 more attacks during Clan Raids and I will be able to bump up my Clan Wars to 10×10. But if this happens, it won’t be until after next month because I need to see not only my financial situation but whether or not Clan Games will have this change permanently. I prefer not having this change and just finding two more friends to play with but I don’t think that’s going to happen.