Clash of Clans: Clan Games Have Begun Once Again

Clan Games have started once again and already I managed to score the first tier of rewards in terms of points. I will say having the three additional accounts has made garnering points a lot easier since I no longer have to wait for just two accounts to complete training. Also, I can swap between accounts if I need to do Versus Battles when I encounter opponents that take forever to finish their attack. That said, I’m pushing pretty hard but I’m starting to put together a strategy while this week wide event takes place. 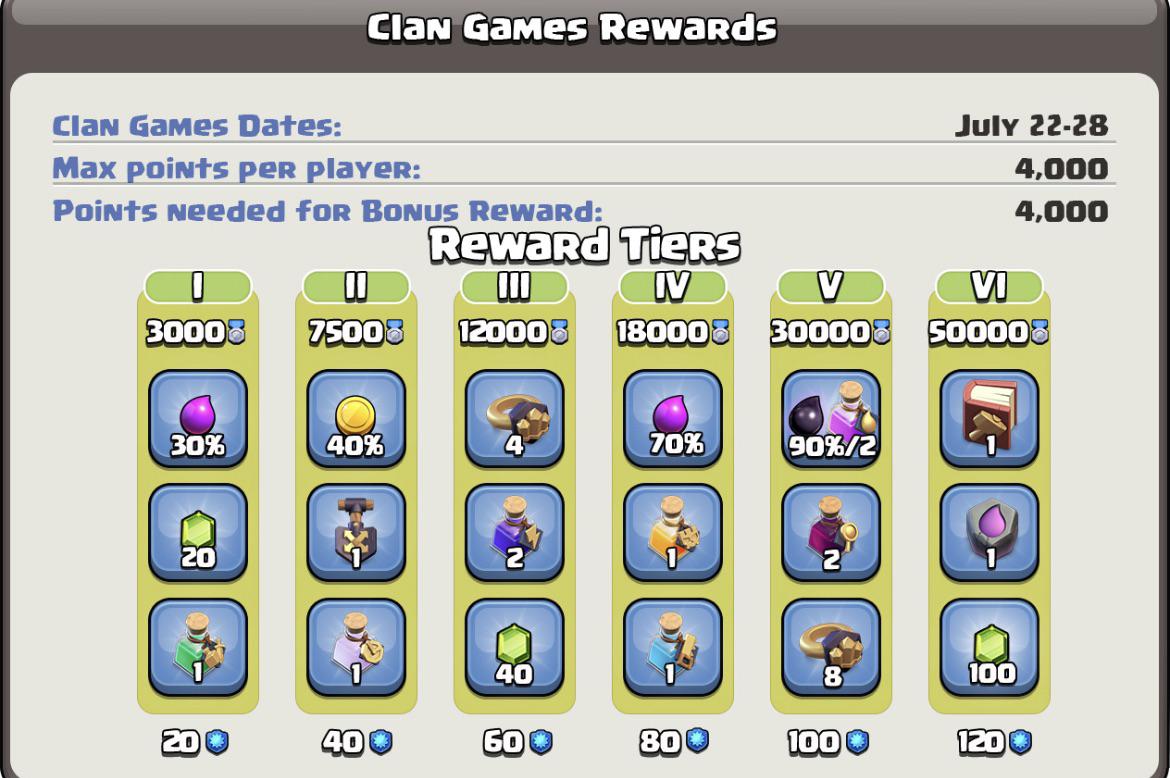 Obviously, the main goal as I have stated since beginning this new quest of starting multiple accounts has been to eventually hit Tier IV rewards. At this point in time, there’s probably little chance during this Clan Games session where I will be able to get the full 20k worth of points per account as I figure there will be times when I might not have the resources available to complete certain challenges. For instance, my lower accounts cannot use the Battle Blimp so in that situation, I would either have to do those on my higher level accounts, or just find a way to skip through for the time being (which you can but are penalized by time).

Other challenges like using a Freeze spell can be used by my TH8, which almost incentivizes me to push my other two accounts to TH8 as well just to gain the benefit of accessing higher level spells. So perhaps in a day or two, I might start rushing my 4th account to TH8. The good thing about my TH7s at the moment is that both have a fair amount of Gems that I can use to strategically instant complete critical buildings like the Spell Factory, Lab and Clan Castle. Pushing those up will be more important than anything else at TH8.

Another thing to think about is whether I want to eventually purchase the Season Pass for my current TH8 account. It almost feels like overkill since most of the resources are overwhelming at that level. If I rushed my TH8 to TH9, then it might become worth it just because I’ll have to start concerning myself with leveling up an Archer Queen in addition to my Barbarian King (which I just got to level 10). But I still need to get my Dark Barracks leveled up as well as finishing my level 10 Barracks for PEKKAs. At least for the immediate future, I can’t see myself pushing to TH9 as I have too much work to do.

That said, I am pretty excited about the rewards. I’m beginning to consider starting up a 6th account since I learned that you can access Clan Games with a TH6. The idea for getting another account is to just help push more points in case I start struggling with having too many low level accounts. Also, a TH6 would be eventually a good “rotational” account for Clan Wars. Once again the idea there would be to swap accounts whenever one account is in the middle of some major upgrades. But at this stage, it might not be important just because it would take some time to get up to where I’m at now with even the lowest level account.

One thing I did though was link the rewards. One thing I realized with this Clan Games is that there are only 6 tiers of rewards compared to earlier ones (like the ones linked on the fandom wiki). If that is the maximum amount of rewards one can obtain going forward, then it feels as though getting three more accounts might be worth it sine I want to use Clan Games as a major source of leveling up my Clan. Looking at that chart, I see that you can get 300 XP from doing up to Tier V rewards, which isn’t bad. That ultimately would really help push my Clan up some critical levels. I mean, my two lower accounts could really use that Dark Elixir while my main two bases could use the Research potions.

At any rate, this has been a tremendous start. I think by tomorrow, I should be able to obtain the Tier 2 rewards. So far I’m pretty happy with this. I’m really hoping the combine effort of the season perks and Clan Games that I will have all three newer bases in or around TH8-9 by the end of the month. I really think that’s possible.