A new round of Clan Games comes tomorrow, which admittedly feels a bit early. However, as ’tis the season to be clashing, we do have a special 7 tier system of rewards with the maximum number of points per account reaching 5k. Thus, Tier 6, for instance, would at minimum require a clan of 10 to reach the full 50k points for the reward while Tier 7 needs at least 15 people to reach the full bonus. But the amount of points needed for the +1 reward still is at 4k. The leaked image of rewards can be seen below.

Just looking at the rewards, I feel that this season is going to be with some conflict especially because the 50 gem, Research Potion and Shovel rewards are grouped up at the same tier. So it’ll be pretty hard to choose in a lot of cases since you can gain 70 gems or a research potion there.

In addition to Clash Games, there’s another bonus gifts you can pick up from the Trader. A leaked image shows the daily reward leading up to Christmas and can be viewed below: 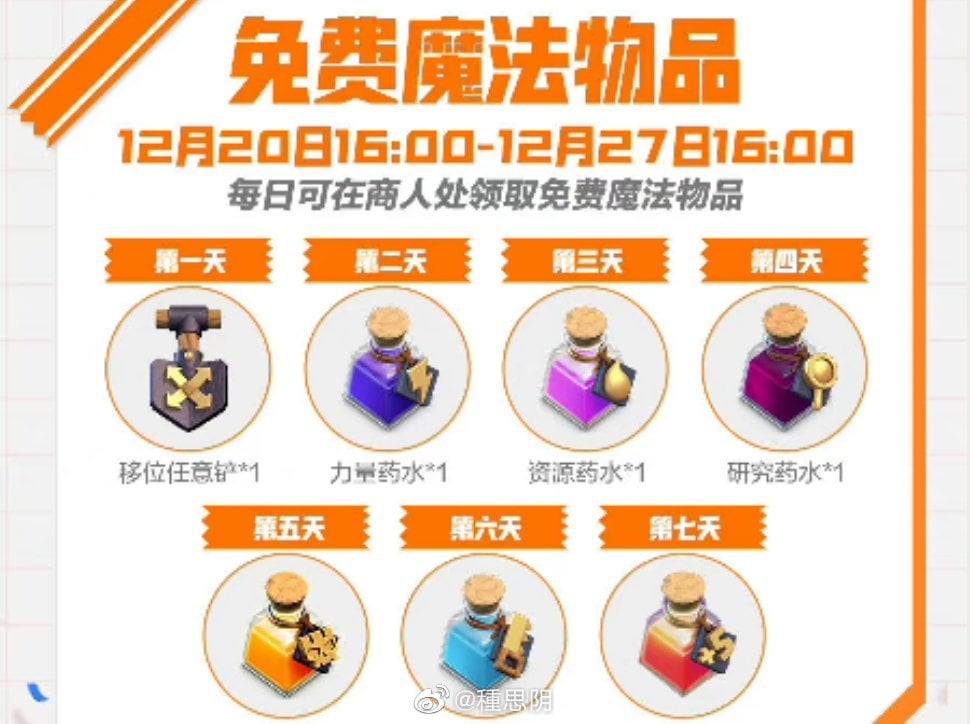 These are all free and I discovered the Shovel this morning upon noticing the “New” hint above the Trader. Quite honestly, the only potions I really can use are the Research and Builder ones. The Resource potion is decent but nothing truly amazing and the Super Potion isn’t great until you get to TH12 for Super Dragons. The other two I’ll probably sell off for 20 Gems. But nothing overly exciting here.

On the other hand, I did make some nice progress today overall. The thing that made me happy was getting my Grand Warden to level 20 on my main TH11 account. Now, with that hero done for now, I can concentrate on upgrading my Archer Queen. Since the season has one challenge for using Dragons, I switched over my army composition on my TH11s to use Electro Dragons again. I have to admit, they’re a real blast (pun partly intended). And because they’re so powerful at this level, it’s easy to continue upgrading your heroes, especially if you aim your attacks against dead TH10s and 11s. Also, for my main TH11, I’m finishing a round of Archer Tower upgrades where they all should be level 9 by tomorrow. After that, I’ll be continuing making a giant circle of upgrades.

Alongside those upgrades, I’ve begun upgrading my Cannons at that account and finished up my Builder Hall at level 7. I started working on a new Army Camp which I’m excited about because I’ll probably add my Boxer Giants to that mix. I’ve been upgrading my Boxer Giants on the side while working through various defenses. But they’re in a reasonable shape that I feel can be used in conjunction with my Cannon Carts. Normally, I just use my Battle Machine as the tank, but lately in facing higher level Builder Halls, I find that my Battle Machine gets taken out too easily. So having at least one more group of tanks should make these Versus Battles more tolerable.

There’s not much else exciting to report on the rest of my TH11s as they’re in a situation where they’re lagging behind. But my main TH10 is getting quite close for a major upgrade. Once my last Cannon gets upgraded, I’ll get out a few more traps then make a push for TH11. That account is in very good shape at this point in time and should make the transition to TH11 quite easily. I think to start, I’ll go with Electro Dragons again then slowly transition towards Ice Golems and Witches once I get all my Army Camps upgraded. But the early part of TH11 should be a lot of fun.

Now, one thing that I am happy about besides the Grand Warden hitting level 20 is that my Archer Queen is quite close to getting level 75. Unfortunately, as I was about to push her up a level, I just realized that all my builders were busy. So I ended up using my Builder Potions to try and finish off one of the Archer Towers that’s close to completion. Once that’s done, I’ll complete my Archer Queen with a spare Book of Heroes, leaving just my Barbarian King and Royal Champion left. But having a level 75 Archer Queen is going to be great since I’ll be able to use her for all the remaining battles until I move up to TH14. In the case of the two remaining heroes, I might just swap between upgrading them, depending on how much resources I have. I think once this season ends, I should be able to have enough resources for one upgrade. I might just go with the Barbarian King since I enjoy using him as a mega tank along with his mini army.

With that out of the way, I’ll provide a brief update with Boom Beach. There is a prototype troop event going on with the Lazortrons. So I’m swapping my troops over to take advantage of this event. Quite honestly, I feel that this event is a bit dull since we probably won’t get to use them for the next Mega Crab. But I wanted to get in a week’s worth of these guys just to switch things up.

The other big thing is that my newest account started a Barrage level 4. That should be a huge upgrade. Now, the only other real critical thing to upgrade is the Artillery. But the 800k cost for Barrage level 4 made the grind worth it. Also, I’m trying to get all my Landing Craft to level 11. Most are now level 10 (one is being upgraded). The idea here is that upon hitting HQ11, I wanted to get my Landing Craft ready so that I can start using x2 Tanks per. At that level, once I get all my upgrades in place, I should have x12 Tanks, which is pretty massive for that level. Of course, I’m going to need to find more GBE somewhere but the overall idea is to have enough fire power to start beating back these higher level bases. Getting to HQ15 is the real goal just so that I can start using Medics. But I think this account is getting into better shape.