Clash of Clans: Clan Games Almost Over And Update Coming

So last night there was a small maintenance window along with an announcement that an update regarding Spell Factories, Barracks, etc. and training coming in the near future in October. I’m pretty excited as this coming update will be a pretty awesome quality of life update that I think will improve the game massively. Along with that, we’re seeing a 12 day discount on Home Village building cost being reduced by 50%! Pretty nifty stuff for those trying to grind their way up.

Let me address the coming update first. While there’s no specific date of this quality of life update, Supercell has mentioned that the update will come in October. What this update intends is a massive change to Barracks, the Workshop and Spell Factories where they will be removing extra Barracks and Dark Barracks, leaving only the highest level available. For those Barracks that are upgrading when this update drops, they will either be consolidated into the one main Barrack or the one with the lowest time to finish that is the highest will remain. In addition (and here’s the big thing), troops, spells and siege machines will be permitted to train while an upgrade goes on.

First, there is a caveat to this change where the troop being trained will still have a time penalty of 50% during the upgrade. Nonetheless, you won’t be blocked. So in the case of a Barracks upgrade, this won’t severely hamper you unless you were one of those that upgraded all Barracks simultaneously where you just got fucked because you did your strategy incorrectly. But the big spot where this will be noticeable is at the Spell Factory and Workshop level because of how you could not train up spells nor siege machines. Now, siege machines weren’t that huge of an issue if you were part of a clan that had at least one member with a high enough level Workshop.

The real benefit to me across the board will be the Spell Factory, especially at lower levels when you recently have upgraded your Town Hall. The problem, especially for lower level accounts, is that at certain Town Hall levels like 8-9, the time to finish is a few days. So if you don’t have the Gems nor a Book of Building, you’ve effectively eliminated your ability to have any spells for a few days. That can be very painful and frustrating. In my case, I would always try to save a Book of Building between those Town Hall levels or make sure I have some gems to finish up the upgrade. With this upcoming update, you no longer have to worry even though training time will increase slightly.

I’ve already seen some people on reddit complaining about this update because they use their Barracks as meat shields for war attacks or that they’ve started or just recently finished their upgrades. Some even complained about not having a spot to dump their excess resources. Nonetheless, for lower level players, this is going to encourage them. I see the TH7-10 areas as the spot where people might either decide to commit or give up. The reason is that the time required for upgrades gets to a point where the game just slows to molasses. Now, if you’re a lower level player that only has a single account and no clan attached and you don’t want to dish out any money, then this update is great for you because you don’t have to deal with some of the frustrations of older, bad design decisions that might’ve chased off players during that middle phase where it really is a make it or break it scenario.

Now, people are saying that the reason for this consolidation of buildings is that it’s being done to make room for the upcoming TH15 update. There was a screenshot showing some monuments that people are comparing to Boom Beach’s statues: 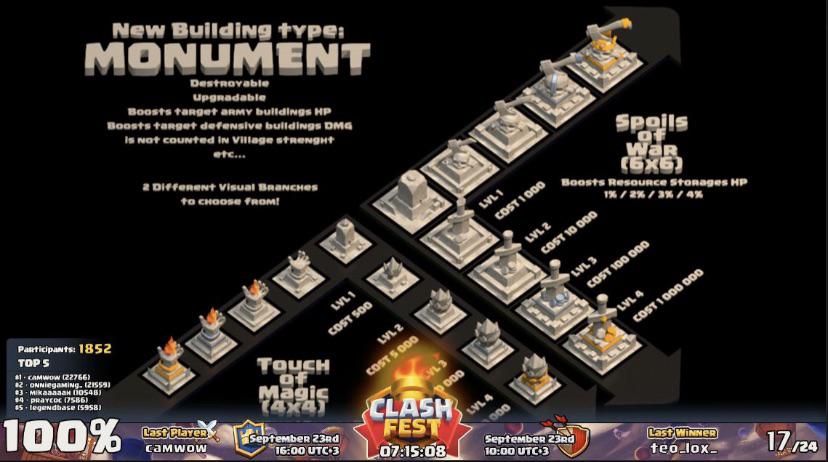 So the way these things may work together is that removing the Barracks will help not only de-clutter the base a little, but make room for whatever is being shown in this screenshot. I read that Supercell had talked about wanting new buildings, etc. to keep the upgrades coming. However, there was the notion of a 100 building limit. The thing with the Barracks in particular is that the excess ones really served no purpose besides just more hassle so getting rid of them is very logical especially if the game wants to move forward.

From there, the next thing I want to talk about is how Clan Games will finish up tonight. For myself, I’ve managed to hit the Tier V rewards, which makes me extremely happy. My next goal is finishing up all my accounts in reaching the maximum points to get the bonus reward. So far two accounts are done and that allows me to focus on the remaining ones. There’s a few very grindy challenges left like a Super Barbarian one that I’ve just started on my 2nd account. I can definitely finish it but I have to get through 4 more battles. I don’t mind since I need a lot of resources as I’ve just started building both Scatter Shots so the extra push will help get me over that last edge.

I will say that last night’s update with the reduced Home Village building cost came at the perfect time for me. I had the perfect amount of resources on my 2nd account to get the 2nd Scatter Shot while freeing up a Builder should help me upgrade my Barbarian King. In a similar vein, I’m trying to push everything across the board and really take advantage of this situation. Stuff like Walls will come in handy here as a spot to dump excess Elixir. So I expect some huge upgrades all around. My only wish was that they applied a 50% time reduction cost on top of the actual cost. That would’ve made the event pretty spectacular.

The only bad thing at this stage is the upcoming TH15 for me. I’m still not nearly close to the point I need to be to have my main account ready for even TH14. I have been faithfully upgrading many key buildings and Heroes, but I know that jump between TH13-TH14 is going to be painful. And once I hit TH14, I want to focus more attention on the Pets rather than my Heroes for dumping Dark Elixir. That means, I don’t want to be in the situation where I have to play catch up on Heroes that have been neglected. On the other hand, at least for my main TH13, I’m getting there when it comes to my Heroes. My Grand Warden is nicely maxed out at 50 for TH13 while I just started upgrading my Royal Champion to level 19. If I can free up another Builder, I’d probably put them on my Barbarian King.

Outside of these goals, the only thing left to do is try to finish up filling as many seasonal banks as possible. I’m close on a few accounts but started late on my newer accounts. So for the time remaining, I need to just continue pushing. My two lower level TH9s are close to the point where I can make that transition to Golems + Witches. While I have been enjoying Zap Dragons, I know that Golems + Witches at TH9 is where I need to be. Then on my higher level TH9, I feel that my overall progress is quite good. I think my Barbarian King is either being upgraded to 14 or 15. But that puts that account into a very good spot at the TH9 level. That said, I think unlike my other three TH10s that I have, I’ll probably stick with TH9 until I get my two heroes to level 20 this time around. Plus I just have too many defenses that need work so I don’t see an immediate need to push just yet. Maybe next month once the season comes around. At least, I won’t have to worry about being blocked on training spells for my Spell Factory upgrade when that happens.

In addition, for my TH10s, I decided not to push into TH11 for this month/season. There’s just too many minor upgrades and my heroes are just getting to a reasonable level where they feel decent. The other thing is that I wanted to give the hybrid army composition a try. And I just have too much left to upgrade before I can make that happen. Most likely, if I choose to upgrade to TH11, it’ll be mid to late next month. I did say that TH11 is where I’ll probably slow down big time on the lower accounts and focus on catching up my bases. I think I’ve done a pretty good job of getting the important pieces upgraded to survive. But once I hit TH11, I know I’m pretty much going Zap Electro Dragon. It’s just too reliable and I don’t need my heroes to make that army work.